Zabriskie Gave Him A Run For His Money 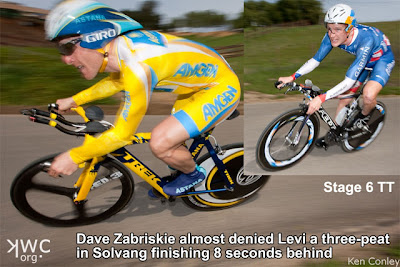 Astana's Levi Leipheimer has delivered on expectations in Solvang, outclassing a quality field in the 24km time trial to cement his place on the podium in Escondido on Sunday. The defending champion took the Tour of California's major race against the clock for the third consecutive year besting his previous course record by seven seconds.

Leipheimer's winning time of 30:39 was fast enough to secure victory over US National Time Trial Champion, David Zabriskie (Garmin-Slipstream) by eight seconds. Gustav Larsson (Saxo Bank) proved his pedigree by finishing 17 seconds behind Leipheimer with a time of 30:57 for third place.

"It gets more special every time," said Leipheimer about his triple time trial treat. "This is more special, because to win by only eight seconds... that's nothing. I consider Dave [Zabriskie] one of the best time trialists in the world and in the history of American cycling. "Not to blow hot air against him, but I really respect him because he has been a three-time national champion and one of the best. For him to show up here and be in great shape and be so tight to me makes this a special victory. Also Michael [Rogers] is a three-time world champion. It has been a big honour for me to win this with riders like that here. It really was a great race."