"Playing domestique is good for my life" 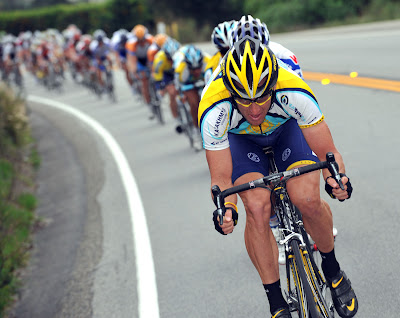 Although Lance Armstrong made his return to professional cycle racing at the Tour Down Under in January, the focus on the seven-time Tour de France was always going to intensify in his home country.

Armstrong finished the Tour of California on Sunday in seventh place, with Astana team-mate Levi Leipheimer winning the event for a third consecutive year.

Armstrong was happy to play super-domestique for team leader Leipheimer, and was seen on numerous occasions sat at the head of the bunch pounding away on the pedals for his compatriot.

"I'm tired, but I was very impressed with the event and I think I can speak on behalf of the other riders and directors that everyone enjoys the race," Armstrong said after the final stage on Sunday. "Obviously we'd have preferred the weather to be a little different, but the crowds were simply amazing."

"I spent 15 years sitting on people's wheels and waiting until the final moment to attack and take all the glory, it's kinda cool to be on the front all day and might be good for my life. I was excited."

Fit for the Tour
Having spent the past three and a half years in retirement, Armstrong was generally happy with his condition in the race, and seemed to suggest that he is aiming for an eighth Tour de France win in July.

"Three and a half years of not watching every gram of food you put in your body and the amount of wine you consume takes its toll, so you've got to get back in to it."

"Also, spending time in the gym, the body weight is coming down naturally from the TDU to here the Giro [d'Italia] will be very beneficial for that. Come July hopefully I'll be 74 kilos like before, but all in all, they're little things we have to work on. It's not complicated."

"The goal is to be competitive, if I can be top ten or top five - if I'm going great, top three - absolutely, that would be perfect. Having never done the Giro and the Tour it's a difficult thing to do and something I've never experienced. But we'll go in to the Giro as fit as we can possibly be, but you don't want to kill yourself."
Posted by Recovox at 7:21 PM