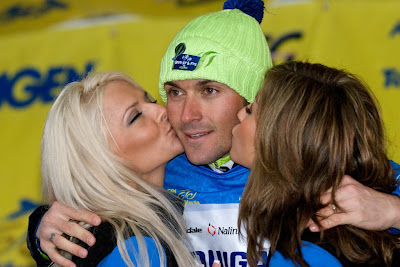 Ivan Basso heads home from California tomorrow having decided not to start Friday's time trial after he injured himself during his warm up.

Although the injury is nothing serious he and his team manager decided not to risk anything and instead fly home to Italy to get it checked out. "It's just some pain," said Basso. "I was happy with the feelings [when riding] and was happy to be here for the six stages. It's been good preparation."

Basso had been lying in 13th place before the time trial, 42 seconds behind Levi Leipheimer. Although it is unlikely he would have challenged Leipheimer for the lead, he had been consistent as he continues his comeback from his doping suspension.
Posted by Recovox at 4:49 PM