Contador Wins Round One At Camp 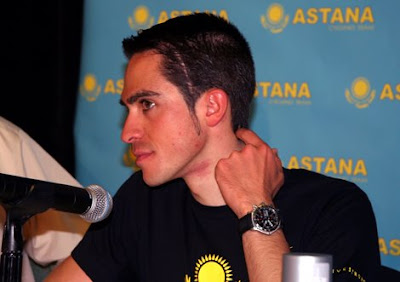 The Astana team camp kicked off Wednesday in Santa Rosa, California. Road Bike Action was in attendance to witness Lance Armstrong’s first training camp with the team on American soil. The atmosphere around the camp was so focused on Armstrong that even three-time grand tour winner Alberto Contador was at risk of fading into the background.

Dressed in his yellow and black Livestrong kit, Armstrong stood out in contrast to the rest to the team dressed in their pale blue, yellow and white kits. When we arrived at the team hotel all the team bikes where carefully lined out in front waiting for the team to emerge for their five and half hour training ride. Like Armstrong himself, his bike stood apart painted in black and yellow and positioned out front to satisfy the media onslaught.

One by one, the riders filtered out, finding their bikes and rolling out to the staging area. Levi Leipheimer, Chris Horner, Andreas Kloden, and Alberto Contador stood quietly surrounded by photographers. With word that Armstrong had arrived the feeding frenzy kicked in and the mechanics area became grid-locked with photographers and journalist trying to get a picture of the seven time Tour de France champion. Once outside Armstrong joined the rest of the Astana team and headed out on one of Leipheimer's favorite training rides in his hometown of Santa Rosa.

On the open road the media frenzy continued. The team moved quickly out into the mountains surrounding Santa Rosa. Behind Astana team director’s Dirk Demol’s car, a long line of cars and motorcycles stretched out all waiting for their chance to pull up next to the pace line and snap a few pictures of Armstrong and company.

As the ride progressed the team kept a steady pace, averaging just over 20mph. The team stayed together until the base of the Coleman Valley climb. At this point Armstrong, Leipheimer and Contador turned on the afterburners and blew the group apart. Halfway up the climb, Contador had gapped Armstrong and Leipheimer with all other riders dropping minutes behind. At the top, Leipheimer had clawed his way back up to Contador with Armstrong rolling over the summit a few seconds back. Make no mistake Armstrong is fit and as dangerous as ever.

On the long descent, the team regrouped and cruised leisurely into Santa Rosa. Back at the hotel Armstrong disappeared to his room while Leipheimer and Contador were put to task in a press conference as Astana spokesmen. Again most of the questions surrounded Armstrong. Both riders had praise and spoke openly about their new teammate. When asked about initial reservations about joining the team Contador clarified his position by saying: "In the beginning it wasn’t very good. You have to understand, I was the leader of the Vuelta Espãna and the team didn’t give me the news, they gave it to the newspapers without talking to me first. It [the Vuelta] was a very important victory and it could have destabilized me reading the news in the papers. Now I am very happy to share a team with Lance – we will work well together.”

When asked what changed his position Contador stated, “Well I think sometimes you have to think things over, see how things develop. Sometimes something that in the beginning might seem negative will turn out to be something positive. I am really happy he is on my team and not another one – and to be able to learn from his experience will only make me stronger in future.”

The Astana team looks devastatingly strong, while the addition of Armstrong appears to have cemented the teams unity and increased internal expectations. The Lance factor is now if full effect at Astana as they prepare to contest the Amgen Tour Of California in just under ten days.
Posted by Recovox at 10:38 PM