"IT'S THE SWEETEST VICTORY OF THE THREE" 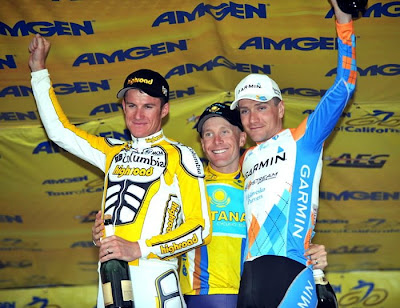 After taking the leader’s jersey a week ago in the pouring rain as the peloton headed into his hometown of Santa Rosa, it was obvious that a long week of defending the race lead was ahead for Levi Leipheimer and his Astana Cycling Team. But if anyone had doubts that Levi would be supported by an incredibly strong and determined team, those thoughts were put to rest today in Escondido as Leipheimer took his hat trick of wins in the Amgen Tour of California, making it three-in-a-row for the California native. A fast breakaway in the last part of the race kept Frank Schleck (Saxo Bank) off the front to take the win over Vincenzo Nibali (Liquigas), with George Hincapie (Team Columbia) taking 3rd at forty-seconds later. Leipheimer was joined on the final podium by Dave Zabriskie (Garmin) and Michael Rogers (Team Columbia) at 36 and 45 seconds back respectively.

“In my head I’ve been thinking about how to articulate it,” commented Leipheimer after his win. “To win it once, that was huge. To win it twice was a little bit of a surprise. But now, three times….it’s the sweetest victory of the three. To keep a streak going like that is really difficult. The pressure builds and the expectations are higher because second is losing. I had the best team in the race; there is no question about it.”

Massive crowds lined the barriers in the start area of Rancho Bernardo as the peloton rolled out in North San Diego County for the 8th and final stage of the 4th Amgen Tour of California. Cloudy skies but warm temperatures of 70 ºF/21ºC made for good racing conditions for the peloton to face the toughest final stage in race history. The riders faced four climbs but the grand-daddy of them all was Palomar Mountain, 5,123 ft/1561m, a 11.7 mile climb with 7% average grade and 21 switchbacks. Certainly a tough test for the riders, but located some fifty miles from the finish in Escondido it was regarded as important but not a deal-breaker for the race.

A group of eight riders attacked the climb, including Jason McCartney and Andy Schleck from Saxo Bank, as well as Ben Jacques-Maynes (Bissell). Local rider Floyd Landis (OUCH) also attacked to bridge to the break as he climbed on his familiar training mountain. Huge crowds gathered on the climb, some reportedly camped out since Saturday to ensure a good viewing spot, and plenty of local cyclists rode the course well before the professionals arrived, showing tremendous local support for the race’s first visit to this area of the state. Leipheimer found himself alone covering the moves over the top, but once on the descent Team Astana re-grouped and Chechu Rubiera, Yaroslav Popovych and Lance Armstrong all lead Levi home safe and sound to secure the win. “I’ve said all along that the comeback is about a couple of things," said Lance after the race. "If we achieve our goals from the cancer perspective and I ride as a domestique all year long, for me it’s a win-win situation. I think it might be good for me personally, too, to do things like that. I’ve spent 15 years sitting on people’s wheels waiting to attack and take over the race. I was excited to ride for Levi. I speak for the team. In our mind there was no doubt that Levi was going to do what he did.”

Leading in the Team classification throughout the race, the final gap from Team Astana ended up at 1.40 to Saxo Bank, and the boys celebrated on the podium with sprays of champagne on each other and the crowd. Estimated numbers for the week of racing topped the two-million mark, far-surpassing attendance in years past.