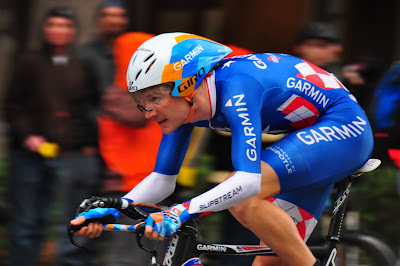 While David Zabriskie was busy claiming second place at last week's Tour of California, thieves were at work stealing over $150,000 USD worth of the American's belongings. The figure doesn't include the value of two vehicles taken from Zabriskie's place during the raid.

The Garmin - Slipstream rider didn't learn of the break-in until he returned to his Salt Lake City home on Tuesday. Salt Lake City Police said the theft occurred some time between February 13 - 23, while Zabriskie was contesting the Tour of California.

"My head is just swimming with the things they've taken," said Zabriskie's mother Sherry Hamik to Desert News. "They even took his clothes. There's not much left."

News of the theft put a put a damper on an otherwise encouraging month for Zabriskie, who was also fined for speeding on the way home from California. He jumped up to second place in the Tour of California with a solid time trial, one spot behind compatriot Levi Leipheimer (Astana).

Detectives have appealed for help from the public, as they expect some of these items to turn up in local pawnshops or online auction sites. Anyone with any information on the burglary or the location of the items is asked to call the Tips for Cash line at 799-INFO (4636) and reference case #09-32767.

Should anyone from outside the United States of America come across some of the smaller items, the Salt Lake City Police Department can be contacted at slcpd@slcgov.com
Posted by Recovox at 6:41 PM