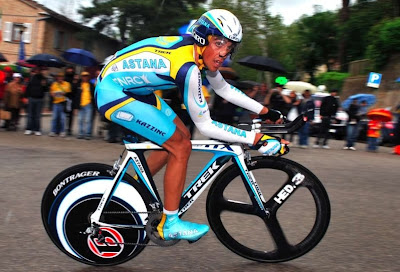 Contador made his bid for the overall win by finishing second in yesterday's
uphill finish to Malhão. He started today's test four seconds down on
overnight race leader Antonio Colom (Katusha).

He finished the time trial in 44:05; he was 33 seconds ahead of France's
Sylvain Chavanel (Quick Step) and 36 seconds on teammate Andreas Klöden.
Briton David Millar (Garmin-Slipstream) finished in ninth.

The final stage is not likely to change the overall standings. The riders
will faces 168.8 kilometres from Vila Bispo to Portimão tomorrow – the only
categorised climb comes midway into the stage.