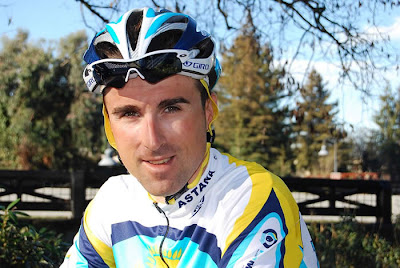 Haimar Zubeldia Agirre (born April 1, 1977 in Usurbil, Basque Country) is a Spanish professional road racing cyclist who rides for the Astana team in 2009.

First success was in 2000, when he finished 2nd in the Critérium du Dauphiné Libéré in overall classification and winning the Young Rider competition. He finished 4th in the same race in 2002.

In the Tour de France, Zubeldia's highest overall placing is 5th in 2003 and again in 2007. In the 2003 Tour, he had some great finishes against Lance Armstrong and Jan Ullrich in the mountains and time-trial.

After this strong performance he backed it up with a 15th and 8th in the Tour de France in 2005 and 2006 respectively. Zubeldia has also performed very well in the Vuelta a España finishing 10th twice in 2000 and 2002.

For the 2009 Season, Haimar Zubeldia has signed with Johan Bruyneel’s Astana Cycling Team. Zubeldia will line up along side riders such as Andreas Klöden, Levi Leipheimer and Alberto Contador.
Posted by Recovox at 6:13 PM