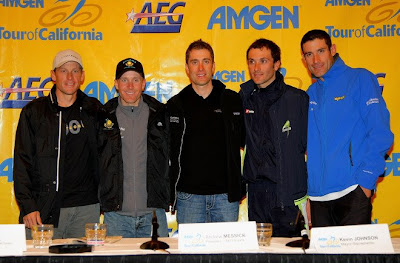 "I think we've made it very clear from the beginning that there are two parts to my comeback. One is the race – the reason we'll be on the start line on Saturday – but more important really is the thought and the idea and the initiative to take Livestrong around the world."

"We were blessed to have amazing launch in Australia, and I don't just mean the team, but the foundation as well, and I hope we can carry that momentum through California and Europe for the rest of the year."

On his return from retirement:

"I've been trying to stay reasonably fit; it's comforting to know that I'm not the oldest guy in the race. I've been at this a long time and it has been an interesting 17 years. I think as far as the science of older athletes goes, performance doesn't drop off, the mind drops off. I've had a couple of breaks and my mind is fresh. Let's do it one more time. I feel strong. At 37, I feel just as strong as I did at 27."

"I think that we, in cycling, can sleep well knowing we've been more vigilant than anyone else with our testing. Our testing is unannounced and unexpected. It would be great to push for a global standard where everyone plays by the same rules. There has been dark spot on cycling, but I think cycling is on its way out of that dark spot."
On racing in California:

On the team's strategy:

"Our biggest concern this year is to try and avoid the cold, wet days that these guys had to race in last year. Bad weather makes it harder and a bit more dangerous, but we're still excited."

"I'm looking forward to the Amgen Tour of California. I'm confident in my talent and my ability."

"We have a fantastic team. It's an unbelievable team and we're really motivated for race. This is a huge race and it deserves our best effort."

"The Amgen Tour of California is a huge race and the support behind it requires our best effort. The power of peloton is phenomenal; you'd be hard pressed to find a better field before July than right here. It's going to be on this week. Our team is really strong; I'm not the only one that can win this race."

"I trained all through the winter for this race. I've been thinking a lot about the time trial in Solvang, and I'll start on Saturday knowing that I've done everything possible to train for this race."

"The field is stronger than ever; everyone is taking it that much more seriously, so the race is getting harder and harder to win, but we came to this race prepared."

"Cycling is a team sport. Last year, the entire peloton threw their best at us; blood sweat and tears went into that race."

"It means a lot to me to be a part of the Breakaway from Cancer initiative."

"Lance one of my best friends; he is an incredible rider. I am really looking forward to this race. We have brought an amazing team to the Amgen Tour of California. It's essentially our Tour de France team; this is an important race for us. We would love to win some stages here. I'm feeling good; better than I have in a long time. I expect big things from myself this race. Our team has a lot of options for this race, so it should be exciting." 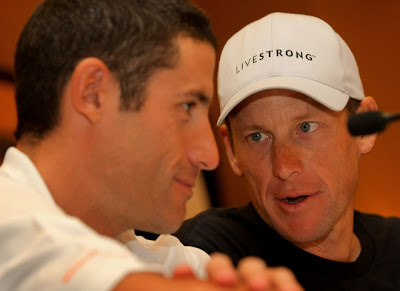 "I am really excited to be here. We just finished training camp yesterday outside of Los Angeles. We had a great training camp and the new riders are fitting incredibly well; we're already like a family. I can't tell you how excited we are to be here at the Amgen Tour of California, one of the biggest races in the world."

"This is the fourth or fifth largest race in world and that's pretty incredible. Hopefully one day it will become a Grand Tour. We have four riders who have been on a podium in a Grand Tour – I'm excited to see it! We've got a lot of up-and-coming talent. I think there are at least three different riders that have the opportunity for a podium spot here at the Amgen Tour of California."

"I've seen this race grow and I'm excited to be a part of it. There is an amazing amount of talent in the peloton and I'm happy to be here and happy to race. Our team is looking forward to making a statement."

"I think it's great that Lance is back, and I think I speak for everyone when I say that it has already brought so much excitement to the sport. He has shown that he is fit and ready to go, so we're expecting great things. He is an amazing talent and we are fortunate to have him back."

"I'm just going to take it day by day and hope I can do something on a stage and then support my teammates. I'm going to be a domestique in this race and I'll be happy to do it."

"We're doing our own thing and doing the best we can."

"The Amgen Tour of California is a huge objective for every American cyclist. I've done my best to prepare; that's all I can say."

"I don't like the rain at all, but we raced here last year and it was raining. Hopefully we won't back down too much due to weather this year."

"I am very happy to be here at the Amgen Tour of California. I am maybe not in my top form, but definitely have a conviction to do as well as possible. We've got a very young team, so we're going to try and race together as united group and do as good as possible."

"There is maybe a little bit more pressure this year. We've got a strong team here, and we've got some good chances. I'd like to cross the line in front many times here in California."

"It's like the Tour de France. You can see the proof that this race is growing, even since last year. This is my first time in this race, but it seems like a great race and draws a lot of media attention."

"I think there are a bit too many good sprinters in this race (laughing). Our team is doing really well; we've been working really good together. Everyone knows this is one of the most important races; harder than some races in Europe . When I won my first stage at the Amgen Tour of California, it was my ticket to Europe, because of the attention I received, so it's always special to race here. I always feel welcome in America."

"This is my second time racing in the Amgen Tour of California. Last year was a different race; the level of competition gets better every year. In my opinion, I would like to win here because the riders are really good and the level of competition is the highest. If I win here, it means I can win other races. Cycling is still a relatively new sport in America, but I think people enjoy this race a lot."

"A rider like me is indebted to this race because, as someone who is trying to move up through ranks, we need opportunities like this to get alongside the best riders in the world. It's a good opportunity for us to showcase that we do have talent in the U.S. and that we need to find creative ways, like to the Amgen Tour of California, to extract it; to develop programs that provide a gap between junior and professional riders. For me, the Amgen Tour of California is the biggest race of my season; it's in my home state."

"I do train with Levi (Leipheimer) in Santa Rosa, and I think we've developed a mutually beneficial training partnership that challenges us both. I'm trying to build my career, so I can hang in some of the biggest races this year. It's an honor to wear a jersey in the Amgen Tour of California."

"Our team goal is to get a 2011 bid to the Tour de France. I'm here to race a bike and do what we can do. The ultimate goal is do what you can while you can, but the tone has shifted and we're looking now to be more present during the second half of the race."

"The peloton is terrific. The organizers have put in a lot of hard work, in a very short amount o f time, to put together a race that encompasses almost the entire state of California. It slots into the world cycling calendar nicely, and the fact is, now, you can happily call it the fourth or fifth biggest race in the world. The organization of this race just ticks. It is the best field that has ever raced in the U.S. It is a tremendous race and I congratulate everyone involved."

"The race is going to be broadcast live every day; the first time that Versus has attempted something like this, apart from the Tour de France. We're going to have a terrific week of coverage."

"The Amgen Tour of California has a big part to play in the world of cycling now. The teams have honored that by sending very good riders here. This is the next big race. The elements in this course will create a very big race." 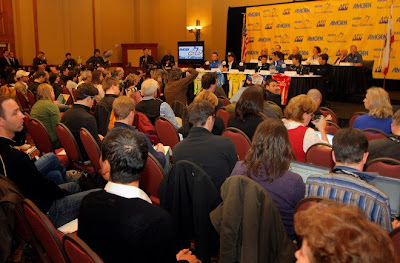