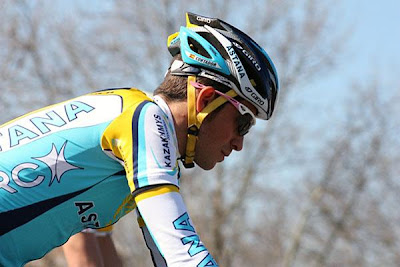 Alberto Contador was disappointed about the result but not about his performance after the finish. Alberto was only beaten by one rider, former teammate Toni Colom. The two were clearly the strongest two riders on the mountain top finish.

"I am satisfied with my performance because it was my first test of the season and it was good enough, but I feel a bit in debt with the team, because they have worked very much during the whole day," said Contador after the stage. "Besides, we have gone all together up to the last 800 meters," added Contador. "I had preferred to attack earlier on the climb but it was not possible. Kloden was in the front."

It looks like it is an obligation in the Tour of Algarve. For the third day in a row, a breakaway of six riders colored the stage. Team Astana, with ambitions for the stage win had to control the race and managed to catch the six riders. Andreas Klöden attacked in the beginning of the final climb, the Alto do Manhão, 3K with gradient of the climb 10% . Sylvain Chavanel (Quick-Step) followed our German rider. The two never got a big advantage of the group that fell in many pieces. At 800 metres of the finish, the two were caught and Alberto attacked. Colom took the wheel of the leader. With 300 meters to go, Contador threw his last attack, but again Colom showed to be strong. In the sprint the ex-Astana rider was the strongest of the two. Colom, already winner of the Tour of Mallorca this year, is always strong in the first month of the season. Last year he performed well as well as a teammate of Alberto Contador on the roads of the Tour of Italy.

Tomorrow, a time trial over 33 K will decide over the final victory in this Tour of Algarve which finishes on Sunday).

"For a beginning of a season It is a long time trial", commented Team Director Dirk Demol. "However it is that way for everybody. We have no choice. We have to go for it. Full speed. In normal circomstances, Alberto has to be stronger than Colom in the time trial, but there are still some good time trialists left in the top of the GC, like Ruben Plaza. Fortunately, some others, like last year's winner Stijn Devolder, lost today already some time.