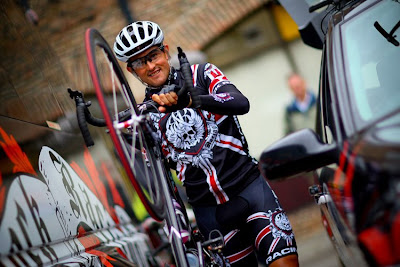 After a rocky start to the 2009 season, Rock Racing's Oscar Sevilla is motivated to make a strong appearance at the Tour of California, set to begin on February 14 in Sacramento. He was scheduled to compete in Argentina's season opener, the Tour of San Luis, but plans fell through when his team encountered problems with its racing license at the start of the new year. The team met the requirements set by the UCI and acquired a continental license on January 16.

A healthy and happy Sevilla spent one month in Bogata, Columbia, before arriving in California this week. "I went to Colombia to train at altitude, to help prepare for the start of our season. I came to Los Angeles so I could get in some team training before the Tour of California."

The organisers have incorporated at least one KOM summit in each of eight road stages. The eighth and final stage stretches nearly 160 kilometres from Rancho Bernardo to Escondido and features four King of the Mountain summits. It is marked as the 'Queen' stage because it includes an 11-kilometre climb up the Palomar Mountain, reaching 1,280m (4,200 feet) through 21 switchbacks.

The additional climbing in this year's event has significantly reduced the odds for field sprint finales, a big change over last year. The race will likely cater to one of the plethora of top-notch climbers in attendance. Sevilla has his sights set on maintaining a top placing in the general classification. "I hope to make a good race because I feel good and motivated," Sevilla said. "The team is motivated to race well, too. We have very strong and professional riders for the 2009 season."

Sevilla expected to be spending more time at his Spanish home during the season because of his team's ambitions to develop a Europe based roster. "I was in Spain resting over the off-season with the family; I went hiking, played tennis and did other sports," he said. Sevilla will likely stay with Rock Racing for the 2009 season. "I'm very happy to spend another season racing in the USA."
Posted by Recovox at 8:33 AM