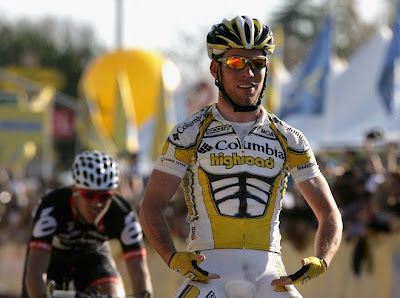 Mark Cavendish delivered a second stage win to his Columbia-Highroad squad in the fifth stage of Tour of California, once again getting the better of Quick Step's Tom Boonen in the bunch sprint. Rabobank's Pedro Horillo filled in for his fallen leader Oscar Freire, who crashed out in Wednesday's stage, with a fine third place finish.

"This was the stage I was targeting since we got here, it worked out perfectly," said Cavendish. "The guys worked so well for us. It was touch and go whether we were going to get the break back. Once again it was George [Hincapie] and Mark Renshaw – once I get dropped off in that position there's no way I can do anything but win."
Posted by Recovox at 5:13 PM