Basso back in California, under Armstrong's eye 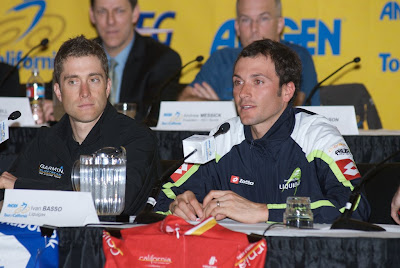 Ivan Basso, 2006 Giro d'Italia winner, returns to racing in the USA for the first time since 2007. The Italian will face key rival Lance Armstrong in the Tour of California stage race that starts tomorrow in Sacramento.

"I've seen the courses in the last months," Basso said. "It looks like a great race this year. I'm very happy to be here but my condition is not optimal right now. It will be good work for me to prepare for later on in the season."

Basso last competed in the event back in 2007 with the Discovery Channel team. He rejoined the peloton after completing a two-year suspension for his involvement in the Operación Puerto doping investigation.

The stateside event marks phase two of his preparations to win back the pink leader's jersey of the Giro d'Italia, May 9 to 31.

Lance Armstrong returns to the sport after retiring in 2005. He also has his attention placed on the Giro d'Italia. The seven-time Tour de France winner noted that he has been keeping a close eye on Basso's stair-stepped improvements.

"Most people know that there was a situation that unfolded between Ivan and I," said Armstrong, who supported Basso's mother during her cancer treatments in 2006.

"I've watched him do his first race back in Japan and his results in Argentina. I was closely monitoring his time trial results and how he was doing on the uphills. I think he is the favourite to win the Giro d'Italia this year."

Both riders have one early season race under their belts: Basso at the Tour de San Luis in Argentina and Armstrong in Australia's Tour Down Under.

Basso began the 2009 season with a three-tiered training program intended to have him in peak condition for the Giro d'Italia. He completed phase one at the Tour de San Luis in mid-January. California marks phase two, and the third and final phase will be at the Tirreno-Adriatico, March 11 to 17.
Posted by Recovox at 11:36 AM