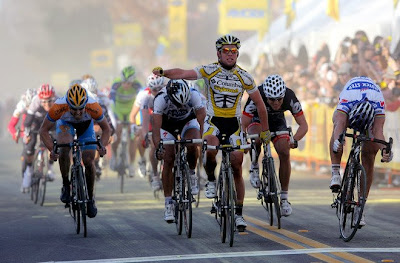 The Tour of California finished in its second bunch sprint in a row, and Mark Cavendish gave the victory to Columbia-Highroad with a long dash to the line after the 187.7km journey to Clovis. Cavendish was nearly pipped on the line by a fast charging Tom Boonen (Quick Step), but held on to get the win. Juan José Haedo (Team Saxo Bank) was third.

The mountainous stage passed over the Sierra Nevada range with five KOM bonuses. Serge Pauwels (Cervélo TestTeam), Jason McCartney (Team Saxo Bank), Tyler Hamilton and Francisco Mancebo (Rock Racing) escaped after the first mountain, and with Franciso Mancebo (Rock Racing) a threat to overall leader Levi Leipheimer (Astana), he was ordered back to the peloton to allow the break to survive for the day.

The trio lasted until three kilometres to go when the Cervélo train came chugging by towing Thor Hushovd in search of a second stage win. But a last kilometre attack from a Rabobank rider, Pedro Horrillo, disrupted the lead-out, allowing Columbia to put Cavendish in position to launch his sprint.

The day was once again marred by crashes, the worst of which took out Rabobank's star sprinter, Oscar Freire. Team Columbia-Highroad lost Kim Kirchen in the crash as well. BMC's Scott Nydam abandoned the race after crashing in a separate incident later in the race.