Tour of CA - Behind the Scenes With Lance 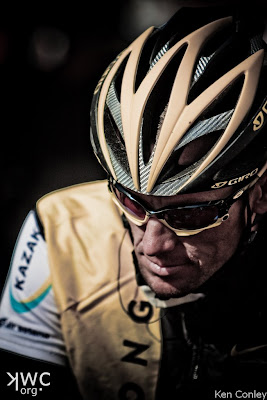 When Lance Armstrong announced that he was coming back to cycling, he said he is doing it for two reasons.

Yes, he wants to ride hard and win bike races, but he also wants to continue his fight against cancer and raise awareness of the dreaded disease through his work with the Livestrong Foundation.

Thursday night in Paso Robles, after the finish Stage 5 of the Tour of California, while the rest of the racers were back in their hotels getting massages or eating dinner, Lance took time to visit with cancer patients at the Central Coast Wellness Community facility in Paso Robles.

Armstrong's meeting with the cancer survivors was held in private, but CycleTo was invited in to watch Lance interact with friends, family and staff at the Wellness Community. To them, he is both a bike racer and a beacon of hope...a living example of how cancer can be beaten. Take a few moments to watch Lance in action in the following video.

Click on the title link to watch the video.
Posted by Recovox at 9:38 AM