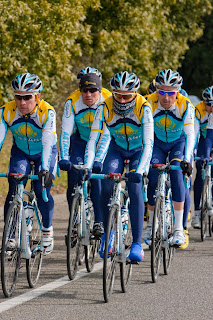 Contador: “I’m hoping for a leap forward in quality in 2009"

Alberto Contador’s 2009 race debut will be this Wednesday, February 18, at the Volta ao Algarve (February 18-22), his first race of the season. Although he’s not yet ready to ride to win, the champion from Astana is eager to get to know the cycling scene in Portugal.

How was training camp in California? Did you reach your goals?

I’ve come back from camp feeling great. I think that we did good work, and I felt better on the bike than I expected. Yes, I think I’ve more than reached my goals, because considering the time of year and my training up till now, I’ve gotten a very good state of form. I’m happy with how things have gone.

Have you worked with the time trial bike?

Yes, one of the goals in California was to see what was needed, and to try to find the ideal position to improve the aerodynamics, according to the parameters determined by the wind tunnel. We wanted to leave with the exact measurements needed to enable us to use what we learned as soon as possible.

What have changes have you made from 2008?

Mainly, we’ve changed the angle of the arms, which will allow me to breathe normally. But once we have the new data, we’ll need to fiddle with it a little on the road in order to adjust everything. At the Algarve, I still won’t have the new input, but I hope everything will be ready for Paris-Nice, which is a very important race, both for me and for the team.

Have you started quality work yet?

Yes, although it’ll be a little too soon at the beginning. I do prefer to be fighting for victories in this first part of the season, because I like to be competitive in most races. I hope to have some possiblities in the first block of races in my program this year.

What are your goals for the Algarve?

It’s still too soon. The Volta ao Algarve will only be the first contact with competition, to get into race rhythm and to enjoy the people in Portugal—they’re great fans.

How are you, what’s your current weight?

I’m still 2.5 kg above my weight during the Vuelta a España. I have enough time to lose it if I need to, but it may not be necessary. I think I’m at a good weight for this time of year.

Will Sergio Paulinho be the team teader?

I don’t know. We still have to decide just what the team will target when we get to Portugal and talk to the director. What’s clear is that since he’s on his home turf, Sergio will have more opportunities than in other races. We’re also taking a very good team, with Paulinho, Klöden, Muravyev, Noval...

How do Leipheimer and Armstrong look to you for the Tour of California? Are they favorites?

At camp I think they were doing really well. They’re at a very high level, especially Levi, who was already thinking about that race. The biggest change that I noticed was that at training camp in Tenerife, where I arrived without having done much training, I thought—without meaning any disrespect—that I was doing better.

I think Leipheimer can win in California, although now the race has gotten a bit complicated. As for Lance, he looks mentally very strong and very motivated, but he’s maybe still a bit short of competitive form.

What do you think about the 33 km time trial at the Algarve?

I would have preferred a shorter one, because it’s too long an effort right now. We’ll soon see how it is when I get there, because whether or not I try a first test of my legs depends on how things go.

How do you feel this year? Do you think you’re going to improve your performance at the age of 26?

I sincerely do think so. I’ll think I’ll improve a lot this year. I’m using the data and comparisons we’ve made in training in past years. I’m a little surprised at how my body is responding, so I hope to make a leap forward in quality.

Who will your biggest rivals be in 2009?

Well, they’ll be the guys that everybody imagines: the Schleck brothers, Menchov, Evans, my teammates Levi and Lance, Gesink and other young guys like Nibali, Kreuziger…I can’t name them all. The unknown factor is whether the young guys will make the leap forward in quality this year. Obviously, there’s a lot you can’t know at this point.

How do you rate Astana in 2009? Is it stronger than it was last year?

To me, it’s a very good team, and it will be a lot like it was in 2008, with some super-motivated team players. I think our form will be especially impressive in the grand tours.
Posted by Recovox at 9:35 PM