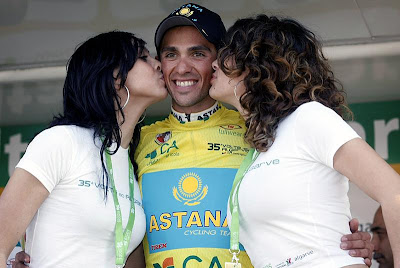 Triple major Tour winner Alberto Contador showed that he is in great shape for 2009 with victory in the Tour of the Algarve in Portugal on Sunday.

The Astana rider's win came after Contador took second place in the race's summit finish on stage three and then steamed home in first in the stage four time trial, outgunning France's Sylvain Chavanel by 33 seconds.

“This is the first step towards the Tour,” Contador said after his stage four victory. “It gives me a lot of confidence.” - and given this was his first race of the season, that was understandable.

“It's the first of four stage races I'll be doing before I have a bit of a break.” The other three are Paris-Nice, Castille y Leon and the Tour of the Basque Country.

Contador won Paris-Nice in 2007 and the other two in 2008, and to judge from his Algarve form there's no reason why he shouldn't be up there again in all three this spring.

The Spaniard's victory was seen in the local press as putting pressure on team-mate Lance Armstrong who finished 14th in the California time trial on the same day.

Contador had played down his chances in his first race of 2009, saying beforehand he was not in great shape becaue of offseason nasal surgery. He was also slightly over his top form weight and had had to change his arm positioning to help his breathing.

However despite all those disadvantages, Contador's victory in the Algarve time trial was the first for a former Tour winner in the Portuguese race since a certain Lance Armstrong back in 2004. 24 hours later, Contador had gone one better - and won the race overall.

Best British finisher overall was Garmin's David Millar, who took tenth on gc despite puncturing in the time trial.

“I am pleased with how it's going in general,” David Millar told Cycling Weekly on his way to the airport on Sunday evening.

“I wouldn't have won the time trial even without the puncture, but I've proved I'm in good shape.”

“The aim was to get a good block of racing in here and in the Tour of the Med. as part of my build-up to Paris-Nice, and that's what I've done.”

As for Contador, Millar said, “I think it's been a long time in this race since a former Tour winner came here and his team were on the front, taking control from day one. And what Alberto did was really impressive.”
Posted by Recovox at 10:30 AM