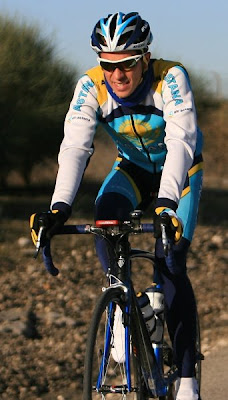 Alberto Contador traveled to the United States on Sunday for Astana’s 10-day training camp in California where he will ride alongside teammate Lance Armstrong.

It’s likely the last time the pair will be together until the Tour de France in July because they both have different racing schedules throughout the first half of the 2009 season.

After his comeback to competition last month at the Tour Down Under, Armstrong’s schedule includes the Tour of California, the Tour of Flanders, Criterium International and the Giro di Trentino before his debut at the Giro d’Italia in May.

Contador, meanwhile, will make his season debut at the Tour of the Algarve (Feb. 18-22) before racing Paris-Nice, the Vuelta al Castilla y León and the Vuelta al País Vasco.

The defending Giro-Vuelta champion said he won’t make a decision on whether he’ll race the Ardennes classics until after the Basque Country tour. After a short break, he’s expected to race the Dauphiné Libéré in June ahead of the Tour.

Contador said he’s keen to put in a hard block of training during the team’s second training camp ahead of the 2009 racing season.

“I’m looking forward to the camp, because this year I started training a little later,” Contador said in a press release. “I’ve been doing very dedicated training for weeks and I am starting to feel good, but until now I’ve only done base work. I haven’t been doing climbs or intervals and I’m not going crazy over logging so many hours on the bike. Maybe at the camp I will start to work on intensity, but I don’t want to do it, because this will be a long season.”

While all eyes will be on Armstrong’s appearance at the Tour of California later this month, Contador will quietly make his season debut at the Algarve race along southern Portugal.

“I love to race and that's what motivates me to train,” he said. “I’m going to debut in the Algarve, but it’s not a race I am familiar with and I won’t be riding to win. It will be my first contact with competition.”
Posted by Recovox at 8:26 AM