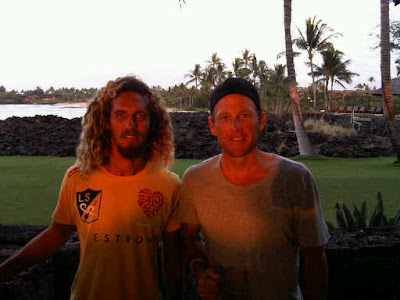 Surfer Rob Machado and Lance Armstrong hanging out in Kona this past week.

Cyclist Lance Armstrong has been spending the last week training on the Ironman World Championship course in Kona, Hawaii.

Armstrong has trained in Kona in previous years as a way to get in shape for the cycling season. Armstrong’s presence in Kona is more noted this time around because according to Armstrong’s coach, Chris Carmichael, he is aiming to compete at the 2011 Ironman World Championship. Armstrong has made references to triathlon and spending time on his time trial bike in Kona on his twitter feed.
Posted by Recovox at 1:10 PM