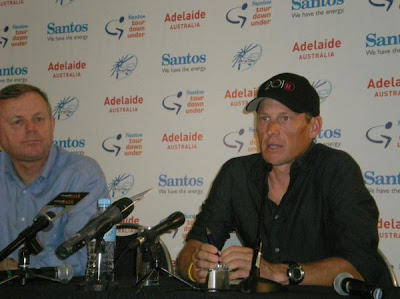 Mike Rann, Premier of South Australia, and Lance Armstrong at their first press conference in Adelaide this year.

Lance Armstrong has announced his charity, Livestrong, will add $250,000USD to the financial aid pouring into Haiti following yesterday’s earthquake. The donation came after Armstrong learned the death toll may exceed 100,000 after landing in Adelaide, Australia, where he is due to contest the Tour Down Under starting Sunday.

“On behalf of Livestrong, we’ve decided to donate 250,000 US dollars,” said Armstrong, while sitting beside South Australia Premier Mike Rann. Armstrong said the donation was carried out by the United States of America’s Former “President Bill Clinton en route with a UN envoy and a staff, including Doctor Paul Farman”.

“Haiti is a little country outside the US and I’m honoured we can do so for our neighbours”, Armstrong added. “Haiti didn’t need another problem added to the political turmoil and the poverty. The global community has to step up.”

Armstrong landed in Adelaide on board his private jet, a Gulfstream from Mellow Johnny Airways. The plane’s tail number was N7LA, which references the number of Armstrong’s Tour de France wins and his initials.