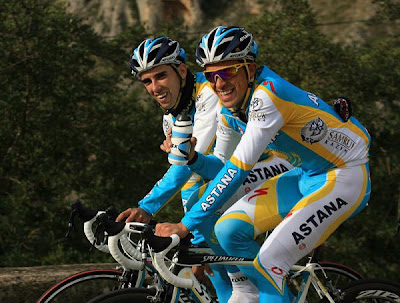 After Team Katusha in December and several Quick Step riders last week, Alberto Contador's Astana squad has travelled to Calpe, near Alicante in southern Spain, for a training camp.

Except for the team's line-up currently in Australia for the Tour Down Under, the whole of Astana's roster has met in Calpe on Thursday for some extensive rides in better weather conditions.

"I don't remember a winter that was that bad," said Contador to AFP, explaining that his pre-season build-up had been somewhat compromised by the cold weather and snow that reigned in Europe since Christmas.

"I am completely confident," he meanwhile declared, even though the 2009 Tour de France winner was not able to train every day in the last weeks. "I feel really good, compared to other years." Contador is scheduled to debut the 2010 season at the Volta a o Algarve in Portugal from February 17-21.

"This year, I don't think I will attain the same level (in Algarve) but it will be a good assessment for the other races," added Contador, who also plans to race Paris-Nice from March 7-14.
Posted by Recovox at 9:08 AM