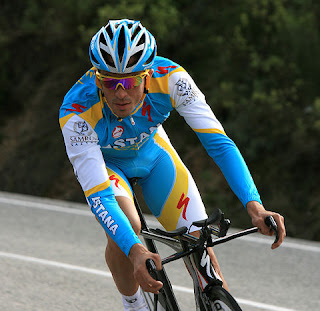 Alberto Contador took the opportunity on Sunday morning, the first rest day of Astana’s training camp in Calpe, to officiate at the inauguration of a new cycle-friendly project in Alicante, a ciclovía. The ciclovía is an innovative take on urban bike trails, and is the first of its kind in Europe.

Contador shot off the opening gun with project leaders Alicante mayor Sonia Castedo and the president of the Puerto de Alicante, Miguel Campoy. The Tour champion pronounced it “a great honor” to fire the pistol at “the first Ciclovía in Europe.”

Ciclovías are distinguished from other types of bike path by being located on regular city streets where motorized vehicles are forbidden during open hours. They originated in the New World, especially in New York and in Latin America. In fact, the model prototype is in Bogotá, which converts 121 kilometers of road to non-motor leisure use every Sunday and on holidays.

The new ciclovía in Alicante’s capital city is an 8-kilometer circuit--4 kilometers of blocked-off city street running out and back along the seafront from the Plaza de Galicia to the dramatic Quarry Outlook. As of today, the route will close to motor traffic every Sunday for safe use by cyclists, skaters and pedestrians.

Ex-professional rider Santos González, current director of the Puerto de Alicante Area Sport division, was one of the creators of the project. His opus has generated great interest in other European cities that are also trying to promote urban and leisure use of the bicycle as a clean, quiet, affordable and sustainable vehicle.

Ironically, Alicante’s route will be closed in the summer, perhaps as a concession to heavier auto traffic due to tourism, or recognizing that citizens don’t require tempting to a bit of healthy excercise along the sunny coastal strip during the warm months.

The endeavor met with enthusiastic backing from the public this morning, as demonstrated by the massive crowd of about 40,000 people who flooded the route starting at 9:00 am.

Training on the TT bike

Alberto Contador spent the rest of the morning trying out his new time trial bicycle, to which he is adjusting as quickly as possible in order to be ready for his first race against the clock of 2010, which will happen in February at the Volta ao Algarve.

Astana’s captain devoted about two hours to testing different technical aspects and tweaking his position on the new machine, which is distinquished by its excellent aerodynamic performance. Meanwhile, the rest of the team took their road bikes out for a session of about two hours.
Posted by Recovox at 3:45 PM