Me-time is knee-time for Armstrong and Max 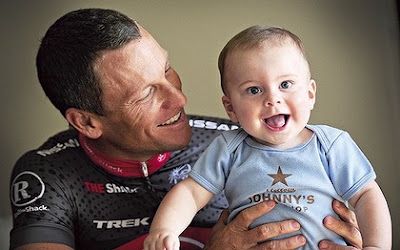 Lance Armstrong may be a seven times Tour de France champion, a former world champion and a multimillionaire who is steering a worldwide fight against cancer that has raised more that $US350 million.

But nothing makes the 38-year-old Texan smile more than the intimate time he spends each morning with his eight-month-old son, Max.

This is the moment that Armstrong - who survived testicular cancer to produce one of the greatest sporting comebacks with his tour wins from 1999 to 2005 - cherishes most before another day in the saddle.

It is the moment the Herald witnessed yesterday in Armstrong's suite at the Adelaide Hilton, before he joined the other riders in his new team, RadioShack, for a four-hour ride in preparation for Australia's biggest bike race, the six-day Tour Down Under.

The hard kilometres were the last thing on Armstrong's mind as he played with Max, all eight kilograms, seated on his knee.

They shared loving glances and chuckles while Armstrong's partner, Anna Hansen, rearranged some of the toys and stuffed animals that had scattered on the floor.

Every now and then, as Hansen picked up one of Max's favourites, she would squeeze it and wave it at Max, much to the amusement of father and son.

Few people see this private side of Lance Armstrong. It emerges when he puts aside the trademark mask of stone he wears as one of sport's fiercest competitors and the outward passion that fuels his commitment to the Livestrong Foundation, which drives his worldwide cancer campaign.

This gentle side of Armstrong shows how much he enjoys fatherhood and the living miracle that Max represents.

Armstrong has three other children with his former wife, Kristin Richard - Luke, 10, and twins Isabelle and Grace, 8 - but his conception with Hansen is the first to be natural.

The six-day Tour Down Under starts on Tuesday, but racing in Adelaide among the 18 international teams in town for the first ProTour event of the cycling calendar begins tomorrow night with the Cancer Council Helpline Classic, a 51 kilometre inner-city criterium race.

The classic, held on a tight circuit suited for sprinters, attracted 138,000 spectators last year when Armstrong opened his comeback from a 3½-year retirement.

Finishing third in last year's Tour de France, he convinced all that he could win an eighth crown this year.
Posted by Recovox at 12:02 PM