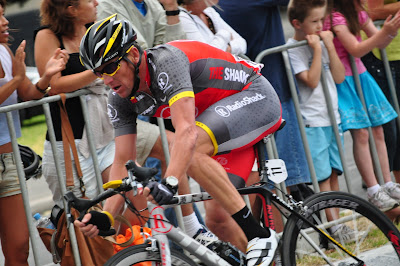 Lance Armstrong's band is truly back together now.

In the 16 months since the seven-time Tour de France winner announced his comeback, he has re-established his competitive credentials by finishing third in the sport's most prestigious event after three years away from racing, attracted a major new American sponsor to the game and reconstituted the team environment in which he was most successful. Armstrong is now freed from the distracting presence of a teammate, Alberto Contador, who could and did demonstrate he was the better rider this past summer.

All those developments were somewhat predictable, given Armstrong's ability, commercial appeal and force of personality. Also predictably, he and Contador became embroiled in a theatrical feud, and Armstrong continued his decade-long defense against allegations of having used illicit performance-enhancing techniques.

Will RadioShack's buttoned-down infrastructure -- the very opposite of an Astana team that overcame serious financial and personal dysfunction to put two men on the podium at last year's Tour -- make any difference in Armstrong's results come July?

Armstrong has consistently maintained that he will start this season at a higher level with a year of base endurance under his belt. His progress will be predicated on avoiding interruptions such as the crash in a minor stage race in Spain in March that shattered his collarbone and marked the end of an astonishingly long injury-free run.

Even absent that detour, it's unlikely Armstrong would have won the internal battle for supremacy with Contador, clearly the best climber in the world and, in a more recent evolution, one of the best time trialers. The 27-year-old Spaniard has won the past four three-week Grand Tours he has entered and has youth, explosiveness and mental toughness on his side. Right on his wheel in the mountains is amiable and even younger Andy Schleck of Luxembourg and the Danish Saxo Bank team, last year's Tour runner-up.

Much could depend on the contenders' supporting casts. Schleck will have familiar characters around him, including his faithful brother Frank. It's a different story for Contador, who landed back at Astana only after circling the runway for months trying to get out of his contract. By the time he finally taxied to a halt, most of his former domestiques had followed Armstrong to RadioShack. Contador will be surrounded by an interesting mix of untried riders and veterans.

There's no disputing Armstrong has one of the best tactical minds in the peloton, aided and abetted by longtime team director Johan Bruyneel. The two have reassembled the kind of loyal posse Armstrong could count on in his years at the U.S. Postal Service and Discovery Channel teams. But, like him, the crew is aging.

Five of RadioShack's riders are over 35. At a team camp in December, Levi Leipheimer noted with some amusement that he is the youngest of the bunch by a month, after Armstrong and Chris Horner (38), Jose Luis Rubiera (37 later this month), and Jason McCartney (36 like Leipheimer). Two other riders in the Tour picture, Andreas Kloden and Haimar Zubeldia, are 34 and 32, respectively.

There is no clear heir to Armstrong or his generation on the RadioShack roster. The prodigious talents of 19-year-old Taylor Phinney, who rides for the Trek/Livestrong under-23 team Armstrong helped found, are at least a year or two from ripening. Expect the team to go after a high-profile rider to fill the gap, perhaps as early as this summer's traditional transfer season.

The team's two major goals in 2010 will be the Tour of California, where Leipheimer is the three-time defending champion, and the Tour de France. But RadioShack could be a factor in the spring classics, as well, led by nomadic Belgian sprinter Gert Steegmans. A talented lead-out man who chafed in that role, Steegmans has won races of his own, including the Champs-Elysees grand finale stage at the 2008 Tour de France. But his career stalled last year when he refused to sign an anti-doping agreement imposed by the Russian Katusha team that called for a fine of five times a rider's annual salary in the event of a doping conviction.

Armstrong is talking about testing himself on some of the treacherous cobblestoned byways featured in the classics. That was the plan in 2009, as well, but it was derailed by his injury. However, it has become a top priority again because of the cobbles the Tour peloton will encounter in the first week of that race.

An accomplished classics rider earlier in his career, Armstrong wants to sharpen his muscle memory on cobblestones to gain a potential advantage over Contador -- one of what may be very few. There's no team time trial in the Tour this year, and the course is top-heavy with climbing.

More-is-better seems to be Armstrong's mantra this year where his calendar is concerned. He's toying with the idea of racing the world championships in Australia in nine months -- a competition he regularly eschewed at the height of his career -- and has not ruled out racing in 2011.

Aside from his contentious relationship with Contador, which played out as much in the media and on Twitter as it did on the road, Armstrong was combative on other fronts, as well.

Early in the season, he lashed out at detractors who criticized him for dropping his much-hyped plan for independent drug testing. There were no signs of detente between the star and French anti-doping authorities, who accused him of delaying an out-of-competition test by taking a shower (an allegation they later dropped) and contended the Astana team was receiving special treatment during the Tour from testers representing cycling's international governing body.

Armstrong assailed one and all, sometimes caustically, as he did when he posted a video in which he read aloud the e-mail address of one critic. However, in a mea culpa that might never have happened a few years ago, Armstrong publicly and privately apologized during the Tour for demeaning the talents of fellow contenders Carlos Sastre and Christian Vande Velde.

Most recently, French judicial authorities have opened an investigation into the contents of medical waste they say Astana left behind during the race. Bruyneel has formally denied any wrongdoing by the team.

Overshadowing athlete signings in the offseason was RadioShack's hiring of Garmin team physiologist Allen Lim. Phinney, a friend and pupil of Lim's for several years (both men live in Boulder, Colo.), played matchmaker in the deal, alerting Armstrong to the fact that Lim might be available.

Lim had been an integral part of Garmin since the team's early days. It became his full-time haven when his role as training consultant for Floyd Landis blew up in his face after the cyclist tested positive for synthetic testosterone, eventually costing Landis his 2006 Tour de France title. Lim was not implicated.

A cerebral number cruncher, tech guru and nutrition maven who also delighted in finding low-tech solutions for athletes -- he filled cut-off panty hose with ice to make cooling devices for riders to stuff into the backs of their jerseys on hot days -- Lim felt secure operating within Garmin's aggressive anti-doping culture. The riders credited him with boosting morale and performance as the team matured into a Pro Tour squad. But a burned-out Lim felt he needed to move on. Among other things, RadioShack promised he could spend more time at home in Colorado, where the Trek U-23 program is moving.

The notion that Lim would go to work for a team led by Armstrong infuriated some Garmin fans, and Garmin manager Jonathan Vaughters admitted he felt personally stung, but several riders said they understood and supported Lim's desire for a career change.

In Year 2 of Armstrong's return, the question remains as to whether he has more to gain than lose by trying to regain his champion's form. He said he doubted the concept himself when he was lying on the ground in pain after his crash and in the days that followed his surgery. Armstrong has plenty of momentum with his new team, but there's still loose gravel on the road ahead.

Bonnie D. Ford covers tennis and Olympic sports for ESPN.com. She can be reached at bonniedford@aol.com.
Posted by Recovox at 9:05 AM