Lance Armstrong Heading Down Under 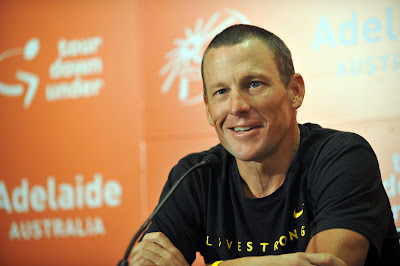 Seven-time Tour de France winner Lance Armstrong will leave Hawaii tomorrow for Adelaide to compete in the Tour Down Under.

Armstrong has outlined his travel plans in a brief message on his twitter site.

He is expected to arrive on a private jet ahead of the race, which begins with a prologue on Sunday.

Tour Down Under organiser Mike Turtur says preparations will step up a gear with Armstong's appearance.

"He was always arriving this week," Turtur said.

"The exact time of arrival was not clear, but obviously we now know what his plans are and it'll be great to see him.

"We've also got Cadel Evans arriving not too far away and Robbie McEwen coming also later in the week, so a lot of good arrivals over the next few days."
Posted by Recovox at 9:38 PM