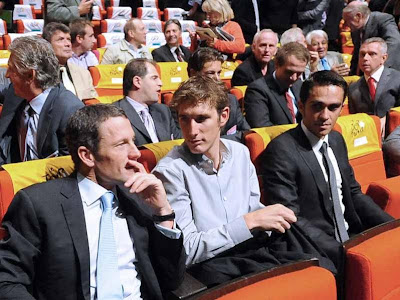 Armstrong, who will debut his new RadioShack team at next week's Tour Down Under in Australia, finished third in his comeback Tour de France last year as Spain's Contador won for a second time.

They were team-mates at Astana last year, but Armstrong, who dominated the Tour from 1999-2005, left Astana to spearhead his new RadioShack team, taking several riders with him.

The two Tour champions have made clear their genuine dislike for each other.

"There's going to be a lot of buzz and build-up about that in 2010, especially now that we've all left to create another team. I will let everyone else build that up. I will be ready, I've got to tell you."

Armstrong, who turns 39 in September, said he was growing in confidence that he can beat Contador for an eighth Tour de France crown.

Armstrong began his cycling comeback at last year's Tour Down Under in Adelaide and it was a massive success for local organisers.

"If I'm lucky enough to get another one (Tour de France), then I could see racing for another season, which would mean going again in 2011," he said. "As far as Australia is concerned, I loved it down there last year - the vibe of the race, the treatment of the fans, the reception we all had, the support of the local and state (South Australian) government.

"It's first class and the organisation there really deserves a lot of standing ovations ... three or four years ago it was a small race, now it's on the (UCI) ProTour."

The Tour Down Under gets underway on January 17.

Contador confirmed this month that he will kick off his 2010 season during the Tour of the Algarve cycling race in Portugal mid-February.
Posted by Recovox at 12:32 PM