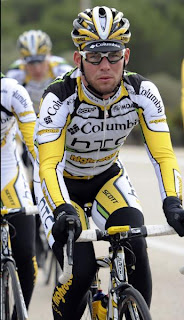 Mark Cavendish signalled that the World Road Championships is a major goal for him over the next two years and this year's Championships in Melbourne, Australia, will sit alongside the Tour de France as one of his two major season objectives for 2010.

"The World Championships is a big target. It'd be nice to win Milan-Sanremo with number one on my back, but in terms of wins, the Tour de France and the World Championships are the big aims for this season," said Cavendish at a press conference at the HTC-Columbia presentation in Majorca on Tuesday.
Posted by Recovox at 9:58 AM