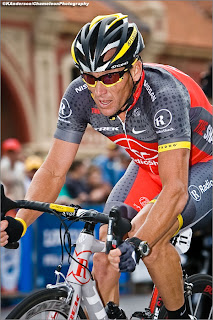 Two of the five breakaway riders from Sunday's Cancer Council Helpline Classic share the same birthday, September 18. Caisse d'Épargne's Mathieu Perget came into the world 13 years to the day after Lance Armstrong. It was enough of a reason for the two to have a chat one year ago - when the Texan returned to competition at the Tour Down Under. That's when Steve Morabito, Armstrong's then teammate at Astana, made the presentation, and the American signed a jersey for the Frenchman's girlfriend.

Both Armstrong and Perget said they felt like they are in better shape than they were in January of 2009. Perget seemed to prove this by initating the breakaway at the Cancer Council Helpline Classic, and Armstrong followed him.

"I wondered what I could do to show off and please myself," said the 25-year-old Perget. "Halfway into the race, after a fast lap, I thought it was the right moment to attack. But I didn't want to go for just one or two laps ahead. When I attacked, I heard 'go Mathieu' in Spanish, and that was my former teammate Oscar Pereiro."

"When our group was formed, Armstrong's turns were twice as long as ours. He obviously enjoyed being in the front. He was fully on."