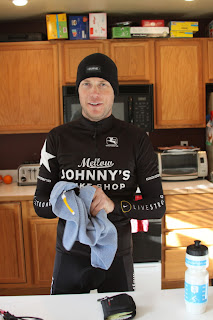 So, I’ve been getting a lot of questions and comments about my diet. In the old days, my diet consisted of pretty much anything and everything I wanted! A couple Cokes, a couple Snickers, breakfast burritos, donuts, Little Debbie Brownies and Swiss Rolls, sandwiches and chips, and fast food for dinner. It was FANTASTIC!!!! And for those of you who are laughing, keep in mind I got over 65 victories on that diet... While other guys were eating pasta, I was happily chowing down on McDonald’s. For example, in 2004, while riding for the Webcor team, I took a trip over the pond for the Elite World Championships in Verona, Italy. The hotel was seriously lacking in my customary cuisine, and couldn’t even make up for it with Italian quality, so I was forced to hijack the director’s team car for a trip to good old McDonald’s! I had a Big Mac, Hamburger, large fries, and a large Coke – of course I was a little disappointed to see that the large Coke looked like a US medium, so I had to make up for the missing calories with a hot fudge sundae... Kristen Armstrong is still scarred from the “incident” because she had been planning on taking the car to go get some health food or something, only to hear that I had already taken it for a trip to McDonald’s. She couldn’t believe it when I ended up 8th in the road race the next day, especially since the staff had been placing bets on which lap I would drop out after they had heard about my pre-race meal. It was a unique diet, but one that has served me well – until now...

At this year’s Tour of California, I suffered a major crash in stage 3, and I knew I was going to have to take two weeks off of the bike after the race concluded. I decided it was a good time to try this new fangled “healthy eating” thing... Of course, I had one last round of donuts for breakfast before the final stage – I mean, what the hell, it was the last day and it had been a LONG week! My method was to begin counting calories and keeping a daily food diary to see how much I was eating. The first to go was the fast food – for the most part... There’s always an occasional special trip to In-n-Out! In place of the fast food, I added a lot of fruits and a FEW vegetables... I mean, seriously, let’s not get carried away here – a guy still has to live! I focused on cutting calories seriously while I was off the bike, but once the training began again, I added a few more sugars back into my diet in the form of Cokes and Snickers to keep up my energy levels while training, but it was still considerably less than before (probably a third of what I had eaten in the past).

While training the diet is very manageable, but is more uncomfortable when there is no training... With several long periods off the bike last season because of injury, I spent a lot of time being uncomfortable, but it paid off, as I am a few pounds lighter and climbing better than ever!

The hardest days are the days with no riding, where my calories allowance is reduced to 1500-2000 calories, where in the past I was used to being able to eat at least 3000 – that took some adjustment! On short days (2 hr rides), I take in about 2500-3000 calories for the day now, whereas in the past, I would have eaten at least a 1000 calories more in the form of Snickers, Cokes, Little Debbies, etc. On the long training days, the calorie count is much closer to what I was used to in the past, but with a lot of the bad foods being replaced by healthier alternatives. And thank God for the race day – where the calories are no holds bar and all my favorite foods are back on the table! I still splurge occasionally to get back to my roots, but in general I’d say I have cut down my weight by getting rid of the worst parts of my old diet (the fast food and sugars) and added more fruits (and some veggies). There is also a big mental benefit from going out occasionally and splurging a little with a good burger. Don’t underestimate the power of In-n-Out!!!!

Thanks for all of questions and comments – keep 'em coming! For anyone who needs help with counting calories - check out the "Daily Plate" section of www.livestrong.com - it is a great resource for a food diary - helps with figuring out how many calories you've eaten as well as how many you have burned.

Click on the title link for more updates at www.chrishornerracing.com!
Posted by Recovox at 11:18 AM