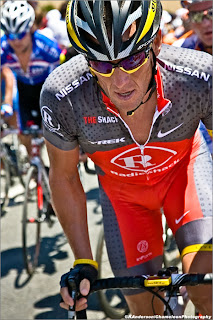 Armstrong finished his stage race of the season, the six-stage race around Adelaide in 25th place, a slight improvement on last year's 29th as he gears up for his attempt on an eighth Tour de France title in July. "Having a beer with Team RadioShack," he tweeted. "Good week here at Tour Down Under."

Armstrong joined the new RadioShack outfit from Astana, moving with team boss Johan Bruyneel who masterminded all of his record seven Tour de France victories between 1999 and 2005. Bruyneel said Armstrong was in better condition than last year, when he returned from a three-and-a-half-year retirement, and also happier with his new team. Armstrong famously fell out with Astana teammate Alberto Contador last season in a feud that came to the boil during the Tour de France, when he placed third behind the Spaniard.

Armstrong earlier said he was happy with the trip, although it was too early to make any predictions for the rest of the season. "It's still so early. Not much can be taken from here in terms of what happens in the summer, in fact nothing," he said. "The main thing is we got good racing in, which equals good preparation mixed with no bad luck: illness, injuries, crashes. Smooth trip, good weather."
Posted by Recovox at 9:56 PM