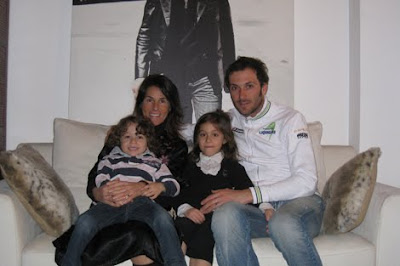 It is dark, early January, fresh snow lights the side of the wet roads. Cyclist Ivan Basso of Team Liquigas-Doimo is home in Cassano Magnago with his wife and two children, thinking about his training and the season to come.

He trained on his fixed-gear bike (48x16) for 120-kilometers on the roads just south of Lake Maggiore, in Northern Italy, today. Basso is building for another win in the Giro d'Italia in May and for the biggest of them all, the Tour de France in July.

Basso was born one kilometer away from where he lives. He raced his first road bike, a Benati, around nearby Lake Varese, the same roads he used to train on before his 2006 Giro d'Italia win and second place in the 2005 Tour de France.

"It's not great here," Basso said. "We have a big problem, it only becomes beautiful at the start of March. For an athlete, that's not good."

If he knows there is a bad spell coming, Basso will drive two hours south to Liguria or another hour south to Pisa to train with Michele Bartoli. He said that he's done this a couple of times already this winter, spending New Year's Eve with Bartoli.

"I prefer to stay at home," Basso continues. "So much during the season I am on the road with team training camps or races, away from my family. Even if you do take a flight to Spain, for example, you can't always guarantee that the weather will be nice."

His home roads offer many training routes. He scans a road map of Italy and starts to rattle off his testing grounds.

"Campo dei Fiori, for climbing, also Mottarone. Or up Lake Maggiore to Indémini, it's ripido, or how to do say?" 'It's steep,' he wants to say.

On the eastern side of Lake Maggiore rises Cuvignone (Monte di Colonna), which he also uses for climbing tests. Closer to home, he will use the 13-kilometre Mozzate loop or the 27-kilometre Lake Varese circuit for time trial tests.

Basso typically trains alone, but he will sometimes ride with Liquigas teammate Ivan Santaromita or pass a couple of hours with one of the area's past greats, Claudio Chiappucci. Chiappucci befriended Basso, 14 years younger, and let him in on his professional life 20 years ago.

Chiappucci won three stages and the mountain competition twice in the Tour de France in the early 1990s. Basso had the chance to follow him in the Carrera team car when he finished second at the 1994 Giro di Lombardia.

"He took me to the gym, training... It was a big deal, not every boy could do that."

Basso started racing professionally the year Chiappucci retired, 1999. He went on to win the 2006 Giro before serving a two-year doping suspension for ties with Operación Puerto.

He placed fifth at the Giro and fourth at the Vuelta a España last year. Now, he believes that his mind is back into the sport and that he is ready to win his second Grand Tour.

Referring to the Giro and Tour, he said, "I think that I have all the possibilities to return and win everything that I had in mind at the moment of my stop."

Basso said that he needs to improve his time trial performances to win a Grand Tour. He wants to return to the time trial position that he had in his last years with Bjarne Riis' Team CSC. He is spending extra time this winter stretching and riding his time trial bike twice a week.

"After my suspension, I found that my body could no longer achieve the position that I had before. Instead of finding a new bike position, it is easier to stretch and exercise to achieve that old position."

He will have his first test when he starts his season at the Volta a Catalunya, March 22 to 28. The Spanish stage race usually starts off with a time trial. His season will continue with Giro del Trentino, Liège-Bastogne-Liège, Giro d'Italia and Tour de France.

Basso believes that his dreams will come true and he's training to make it happen. Tomorrow, he will be back on his white and green Cannondale fixed-gear bike, which waits for him, leaning on the wall outside the back door. 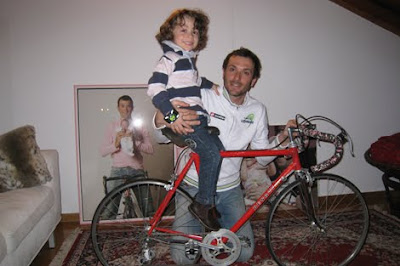