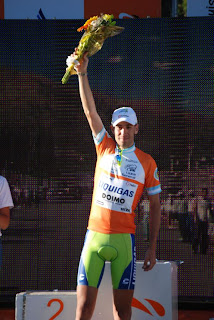 Vincenzo Nibali (Liquigas-Doimo) will turn his attention to the months of March and April for the Spring Classics followed by the Tour of California after capturing the overall title at the Tour de San Luis in Argentina on Sunday.

"In Italy it's very cold but I have been able to train very well in my region because the temperature is very OK, about 15 or 20 Celsius," said Nibali. "It is very important for training well especially before the Tour de San Luis race and also it was good training during the race. Now, I feel like I am in very good condition for the start of my season in Europe."

Nibali will target Italian stage race Tirreno-Adriatico followed by Milano-Sanremo in March before riding Amstel Gold Race, La Fleche Wallone and Liège-Bastogne-Liège in April. "Liège-Bastogne-Liège is the one Classic that I can do the best in," he explained. "I hope that one day I can win this race because it is the most beautiful race."

Following the Spring Classics, Nibali will skip the Giro d'Italia, travelling instead to the America's western seaboard to compete in the Tour of California between May 16-23.
Posted by Recovox at 9:29 PM