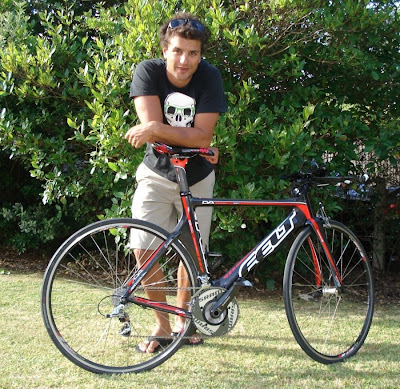 Felt Bicycles is pleased to announce the addition of 2008 Ironman 70.3 World Champion Terenzo Bozzone to its lineup of talented Olympic and World Champion triathletes. The 24-year-old New Zealander will ride Felt bikes, including the DA triathlon bike and AR aerodynamic road bike, in 2010 and beyond.

“After visiting the company and speaking with Jim Felt and the rest of the crew, I had no doubt Felt was the place I wanted to be,” Bozzone said. “Felt’s track record of producing aerodynamically superior bikes is second to none, and I’m confident I will be on the best possible bikes and well looked after.”

Bozzone already has dozens of major victories to his name, including the 2008 70.3 Half Ironman World Championship title. Born in South Africa and raised in New Zealand, Bozzone has seen success at every level of multisport competition. As a junior athlete, fresh out of high school, he won the Men’s Under-20 Duathlon World Championships in 2001 and 2002, and the Under-20 Men’s Triathlon world titles in 2002 and 2003.

In the following years Bozzone chalked up elite category wins at nearly every major half-Ironman. In 2008, he dominated the Ironman 70.3 series, winning in Kansas, Idaho and California, before taking the 70.3 world title in Florida.

“Terenzo is a fantastic talent and we couldn’t be more pleased he is choosing Felt Bicycles to help take him to the next level of his career,” said Felt company namesake Jim Felt. “He’s a proven winner, and the sky is the limit for this young athlete.”

Having conquered 70.3 competition, Bozzone is now turning his attention to full Ironman-distance competition. His transition to the longer format got off to a solid start last March when he finished second at his first full Ironman in New Zealand.

Bozzone competed at the Hawaii Ironman World Championships for the first time last October and despite suffering badly on the run he finished 11th, showing great promise. “I am really enjoying competing over the full distance races and I think I have gained a great deal of experience this past year,” Bozzone said.

For 2010, Bozzone plans to continue competing in key 70.3 events, while also focusing more on the Ironman events. “My main goals are to get an Ironman title under my belt and win a couple 70.3 races,” he said. “And a top-five in Kona would top off the year for me. Long term, I aim to be the best triathlete in the world, and the most recognized triathlon is Kona.”
Posted by Recovox at 10:42 PM