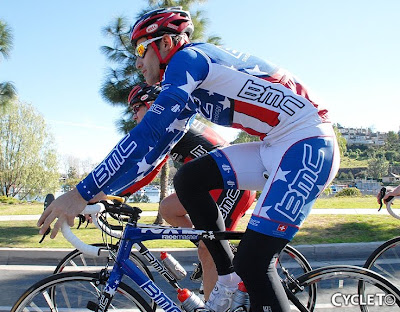 BMC Racing Team has hit the roads around Agoura Hills, California for a final tune-up for the 2010 season. Fresh from a strong start at the Tour Down Under, marquee signings Cadel Evans and George Hincapie joined Alessandro Ballan and the rest of their new colleagues for a training ride on Wednesday.

The US-registered Professional Continental squad recently secured much-hoped-for wild card status from the International Cycling Union (UCI) and will accordingly be invited to the full list of ProTour and Historical calendar races. Given the strength contained within their ranks will be a force as they head towards the Spring Classics with Hincapie and Ballan at the head of the squad.

World Champion Evans confirmed yesterday that he will head to the Giro d'Italia for the first time in eight years determined to secure another spell in the race leader's jersey. Already showing good condition in South Australia at the Tour Down Under last week, Evans' enthusiasm for the new season was mirrored by his teammates as they spun their legs out at the camp north-west of Los Angeles.
Posted by Recovox at 9:50 AM