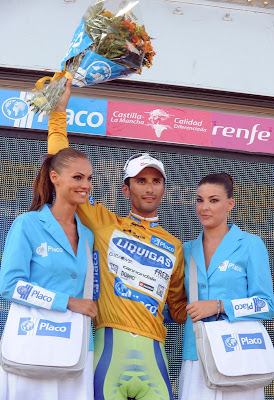 Tom Boonen has shown that he is back on top sprinting form after his cocaine positive earlier this summer by winning stage three of the Vuelta a España into Córdoba. He beat Daniele Bennati (Liquigas) and Erik Zabel (Team Milram) to the line, with Koldo Fernandez De Larrea (Euskaltel – Euskadi) and Nicolas Roche (Crédit Agricole) netting fourth and fifth in the mass bunch gallop.

Bennati had picked up seconds in two bonus sprints, and his runner-up placing on the stage lifted him clear of today's leader Alejandro Valverde (Caisse d'Epargne) in the general classification. He ended the day seven seconds ahead of the Spaniard and ten up on Boonen. His team-mate Filippo Pozzato and Egoi Martinez De Esteban are next in line in the overall standings.

The sunny stage took the riders 168.6 kilometres from Jaén to Córdoba. Andalucia Cajasur rider Manuel Ortega Ocana attacked almost immediately after the start in his hometown, making the most of early lethargy on the part of the peloton to pull over fifteen minutes clear. He had a lead of six minutes 49 seconds when he hit the start of the day's lone categorised climb, the third cat Puerto de San Jerónimo, but a big solo attack by Paolo Bettini saw the Italian close to within one minute and 45 seconds by the summit.

The World Champion then caught and dropped him soon afterwards, only to be himself recaptured with fifteen kilometres remaining.

Sylvain Chavanel (Cofidis) had been active in chasing Bettini and then went again three kilometres from the line. He was hauled back a kilometre later and, in the ensuing bunch sprint, Boonen overpowered Bennati as well as the other fastmen in the race.