Hamilton Moves On with National Title 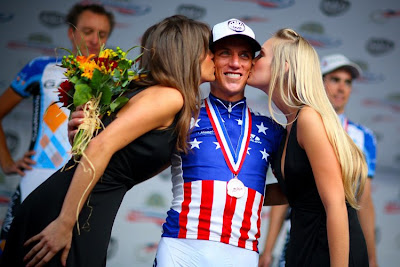 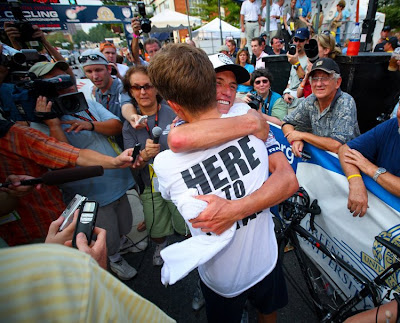 Tyler Hamilton (Rock Racing) took a step towards putting his darkened past behind him on Sunday when he narrowly edged out Blake Caldwell (Garmin-Chipotle) to win the US professional road championship. Hamilton is making the most of a second chance in his cycling career, like many of his teammates, when the owner of Rock & Republic clothing, Michael Ball, gave him a spot on his squad – even as he pondered hanging up his wheels.

"Last year I thought the race in Greenville was the last of my career," he said. "Fortunately for me I got another chance. Michael Ball gave me another chance with Rock Racing and here I am. It's really special and a pretty emotional feeling for me."

But even that chance was a challenge at first, as he and some of his embattled teammates found racing difficult when they were not allowed to start the Tour of California. Hamilton's name was involved with the Operación Puerto investigation. Hamilton also served a two year suspension for a positive test at the 2004 Vuelta a España, though he still professes his innocence in the matter.

Though not allowed to race in California he kept riding and racing, eventually finding success at the Tour of Qinghai Lake in July. He kept enough of that form rolling into Greenville, and saving himself for the road race.

"I knew I had a chance, that's why I took yesterday off with the time trial," he said. "I am an Olympic champion in time trial but I decided to save my energy for today. I wanted to be a strong helper for Fred Rodriguez who has won this before or take a chance myself."

"I thought I could be in the mix, and once you are it just takes a little luck."