Ekimov: ‘No comeback for me’ 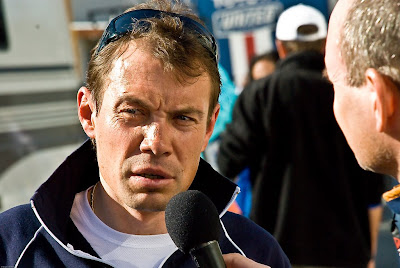 All the talk about Lance Armstrong’s comeback hasn’t tickled any thoughts of a return by Russian veteran Viatcheslav Ekimov.

Now 42, Ekimov is busy enough these days working as a sport director at Astana and as a coach at the Russian national team.

“I won’t be coming back,” Ekimov told VeloNews with a laugh. “I already came back once. I am finished with racing. I got it out of my system.”

Ekimov, however, made his own comeback of sorts, briefly retiring in 2001 only to return to U.S. Postal Service after life behind the wheel as a sport director of a start-up Russian team made him realized he missed the thrill that came with racing.

The three-time Olympic medalist says he understands why Armstrong wants to make a return to cycling.

“I was not surprised,” he said. “I know it’s very difficult to stop. The emotions you find in racing you cannot get anywhere else in life. When you see that you still have the capacity to race at the same level, you want to come back.”

Ekimov eventually became one of the key members of Armstrong’s “blue train” that paved the way for the Texan’s seven consecutive Tour victories.

But he missed Armstrong’s first victory in 1999 when U.S. Postal Service didn’t extend his contract and he raced for the Amica Chips team. Armstrong called that one of the team’s biggest errors and worked to re-sign Ekimov for the 2000 team.

After the 2001 Tour, however, he announced his retirement and took over management of the Lokomotiv team, but that was a short-lived detour.

Ekimov announced his desire to return to competition and he began piling up the training miles. He was legendary in his long-distance, eight-hour training rides and would ride up to 35,000km a year to train.

His first race back in 2002 was the Dauphiné Libéré and went on to make that year’s Tour team.

“My break was real short, just six to eight months. Lance has been three years off, so it won’t be easy,” Ekimov said. “For sure it will be a big spectacle, but physically it’s not going to be easy for Lance. But he’s a big champion and everyone knows his character.”

Ekimov missed the 2004 Tour with injury, but rode two more Tours before retiring for good in 2006.

He led the peloton onto the Champs-Elysées in 2006 in what was his last Tour. He started and finished 15 Tours, tying him with Lucien Van Impe with second on the all-time list.
Posted by Recovox at 10:01 AM