Bennett, Lavelle on top in L.A. 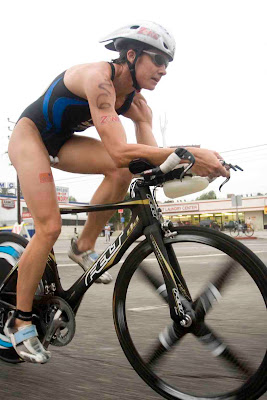 Story and photos by Jay Prasuhn

Sept. 6, 2008 -- It was business as usual for Australian Greg Bennett and American Becky Lavelle, as the two extended their LifeTime Fitness Triathlon Series leads by winning the Los Angeles Triathlon today.

The morning grey at Venice Beach gave way to a sunny, warm day in Los Angeles. But under the cool cloud layer, the men commenced with burning up the road.

After American Andy Potts ripped out of the Pacific first in 18:29 with a group including Canadian XTERRA star Brent McMahon, Stuart Hayes of Great Britain and Australian Paul Matthews in tow, he went to work distancing himself from his chasers.

Conspicuously missing from the lead group was LifeTime Series leader Greg Bennett. “I was on someone’s feet, and he got gapped,” he said. “By the time I looked up, it was 10 meters, and I couldn’t close it.”

Out of the water a minute behind the leaders, Bennett would be forced to chase his way to the front—not the best situation, especially considering that he was making the start despite a cold that his wife Laura brought back from her trip to the Olympics. “The last 10 days I had to back the training off, taking Robitussin,” he said. “I didn’t know how I would go.”

But chase he did. With his SRM reading an average of 360 watts, a coughing Bennett cut a fast path to the front. “Coming into the race, I had to make it a strength race, and made the bike really important," Bennett said.

Bennett tore through the field to move past Matthews, then Potts 25k into the bike, to move into the lead. “That was one of the best rides I’ve had in a long time,” the Aussie said. His final bike split, 53:57, was best by over a minute and a half.

By T2 Bennett had a 25-second lead on Potts. With his Hawaii Ironman debut to come next month, Potts found he simply missed his speed. “I’ve been putting in more miles, and it kinda saps that speed,” Potts said. “I definitely didn’t have dead legs—I could keep going at my pace, but I couldn’t you know, 'click-click' into that next gear and hit it.”

Both Bennett and Potts split the run within one second of one another (31:19 and 31:18, respectively), leaving the Aussie cruising across the finish with another big win. Potts earned second, while Matthews held off Hayes for third.

While the LifeTime finale in Dallas is of key importance to Potts’ season, his Hawaii Ironman debut, one week after Dallas, has him excited. “Normally I’d be done and just catch a cab back, but for sure I’m gonna ride back to the hotel, then maybe go for another dip. More training!”

On his debut in Kona, he added “My expectations are realistic. I know what Kona stands for, but I don’t know the experereince. I’m going there to feel that magic that everyone talks about. It’s triathlon’s biggest day, and I want to be a part of it.”

The women’s race was equally electrifying, even despite the absence of Olympic gold medalist Emma Snowsill, who missed the race due to other obligations. But today’s race saw a select group—Beijing Olympian Julie Swail, Lavelle, Mary Beth Ellis and Pip Taylor—land on Venice Beach within a few seconds of one another. Left out of the mix nearly two minutes down out of the water was reigning Ironman 70.3 World Champ Mirinda Carfrae.

Lavelle put her stamp of authority on the race during the bike, riding clear of her chasers. “That’s my goal during all these races, is to hammer the bike,” Lavelle said. While all others fell off pace, Ellis was able to stay within five to 10 seconds of Lavelle throughout the relatively flat bike from Venice Beach to Downtown Los Angeles. She in fact took the lead from Lavelle on a steep descent during the final mile of the bike, but Lavelle re-assumed the lead as the two dove into T2.

From there, it was early pressure during the run that dropped Ellis from Lavelle's heels. “ I just had to hammer the first three miles on the first loop,” Lavelle said. “It worked out great.”

With just the finale left in Dallas on October 5, both Bennett and Lavelle extended their The LifeTime Triathlon Series Race to the Toyota Cup. With Britons Liz Blatchford and Jodie Swallow as no-shows here in Los Angeles, Lavelle is all but assured a series win with her L.A. victory, while Bennett gained further ground on Potts and Stuart Hayes of Great Britain.