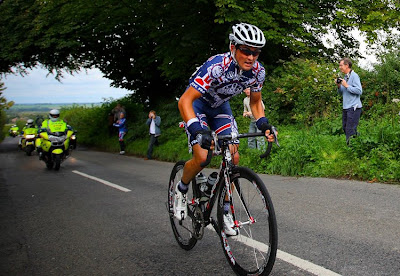 Spaniard Oscar Sevilla is 10th, seven seconds off the lead, and American Fred Rodriguez is 12th, eight seconds behind. In all, 84 riders – including five of six from Rock Racing – are within 10 seconds of overall leader Alessandro Petacchi (LPR Brakes).

The flurry of action on Stage 2 happened within the last six miles of the 90-mile (145 km) race from Milton Keynes to Newbury. Sevilla was the unfortunate victim of the majority of unluckiness. The Spaniard first suffered a flat tire on the final categorized climb of the day, but quickly received help from teammate Victor Hugo Peña, who gave up his bicycle.

But after chasing back and shepherding teammate Rahsaan Bahati into position for the final sprint, Sevilla punctured again as a massive pile-up occurred inside the final two miles, splitting the field.

“Everything was fine the entire race until we got to the last couple miles,” Sevilla said. “Then it all fell apart.”

Because Sevilla’s mishap occurred in the last 1.8 miles (3 km), officials credited him – and the majority of the peloton who were stopped as a result of a rider hitting a median – with the same time as the group they were riding in when the crash occurred.

Up ahead, Matthew Goss (CSC-Saxon Bank) won the stage over a pair of Team Garmin-Chipotle presented by H30 riders: New Zealand national champion Julian Dean and Australian Chris Sutton. Rodriguez was the only Rock Racing rider to make the 20-strong lead group that finished about 15 seconds ahead of the pack (that was later given the same finishing time).

Earlier in the race, Sevilla showed his strength as part of a five-man break that escaped on the first King of the Mountain climb. He won the sprint to take maximum mountain points before his group was caught.

Peña’s unselfish act to help Sevilla ended up costing him valuable spots in the overall classification. After getting a new bicycle, the Colombian was inadvertently led off course and eventually came in more than 13 minutes after the leaders. But by finishing within the time cut, he will start Tuesday’s third stage of the eight-day race.
Posted by Recovox at 11:01 AM