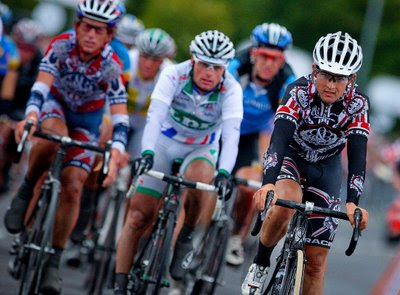 Burnham-on-Sea, England — For all but a handful of riders, the third stage of the Tour of Britain was certainly one to forget – Rock Racing included.

The team’s troubles on Tuesday included an early race crash in the rain that took down Tyler Hamilton and Oscar Sevilla, a number of bike changes for Hamilton as he chased back, and the retirement from the race by U.S. criterium champion Rahsaan Bahati.

By day’s end, all but 23 of the 91 riders found themselves out of contention for the overall as the peloton finished more than 13 minutes Frenchman Emilien Berges (Agritubel), who soloed to victory to win the 115-mile (185.7 km) race.

Hamilton chalked up the misfortune to bad luck. A deep gash on his left arm required three stitches while Sevilla also had to be attended to by race medics for severe road rash on his right hip.

“A week or so ago, I was winning the U.S. road race and things couldn’t have been going better,” Hamilton said. “Today, I had to ride a neutral bike for a time that was too big and then the next bike had its chain snap on a climb. That’s bike racing. Your luck can change just like that.”

Sevilla, Hamilton and Rock Racing’s other three riders finished 13:02 in arrears on the longest stage of the eight-day race. In the overall classification, Sevilla is now the team’s best-placed rider in 32nd, 13:09 behind.

Bahati was one of three riders who did not finish Tuesday’s stage. However, he will remain with the team through the remainder of the race and be a part of Monday afternoon’s special appearance and autograph signing at Harrods in London.
Posted by Recovox at 5:11 PM