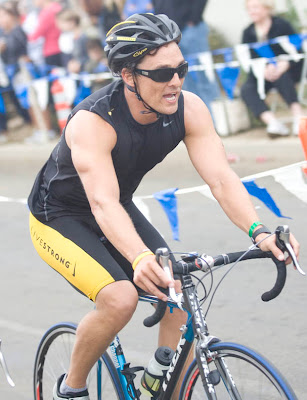 Sept. 15, 2008 -- The scene Sunday was unlike any other triathlon on earth: Chris McCormack, the reigning Ironman World Champ, is three weeks away from defending his world crown in Kona, and had just taken a late season tune-up win at the 22nd-annual Nautica Malibu Triathlon in front of over 3,000 fans that flooded the tiny beachside town.

And not one reporter (save from this publication) sought him out after the race. Few even knew he was there, or cared that he won the half-mile swim, 18-mile bike and 4-mile run event in 1:18:46, or even who he was. Macca anonymous at a triathlon? Had earth tilted off its axis?

No, this day was about the celebs. Big-name celebs. While there were over 3,000 athletes competing between individual and relay events, the two highly notable age groupers that lined up Sunday morning on Zuma Beach for the race were a couple first-timers: actor Matthew McConaughey and actress/singer Jennifer Lopez.

“I was worried about Matthew McConaughey because I see he’s been training with Lance (Armstrong),” McCormack, standing outside the finish gantry, said with a wry smile. He, along with a few fellow pros were unfettered by the press. “Yeah, it was surreal,” McCormack said. “But the way it looks, these celebs did an awesome job.”

With them came fans. And paparazzi. As J-Lo and McConaughey walked from transition to the swim start, a swarm of photographers, tripping over themselves and the occasional clump of beached kelp, snapped shots, lighting up the misty dawn with the crackle of flash strobe. 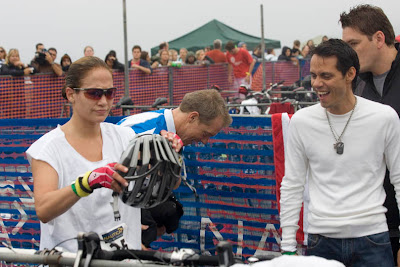 “It was pretty wild this morning watching all the flashes going off,” Chris Lieto said. “I walked in with Matthew going into the water, and all these photographers were in the water and I told him “I don’t know how you deal with it. And he said ‘aw, I just focus on what I’m doing and just ignore it.’ Hats off to them. I totally appreciate them coming out and being part of the sport.”

McConaughey, who paired with respected L.A. Triathlon coach Ian Murray of Triathletix spoke to Triathlete after the race. With a solid finish time of 1:30:44, McConaughey spoke with an excitement for not just completing the race, but placing in the top five in the celebrity category. Considering he has trained with good buddy Lance Armstrong in the past, he was certainly not out for a joyride. In fact, he and Murray did a course recon earlier in the week.

“Just knowing the course, getting familiar with the course, knowing where I could put in some horsepower saved six, seven minutes,” McConaughey said. “Ian said to set things out, then go over it all in my mind—shoes first, then helmet, then sunglasses. And he said ‘don’t bring choices, either.’ Just bring your one thing you gotta have.”

And of his day? “The swim, I had no idea,” McConaughey said of his first discipline expectations. “I was out of breath in the first 200 meters and had to open my wetsuit to let some water in to cool down. After that, I did the parallel [portion of the swim] real cool, got out of the water—and was like ‘whoa’… a little dizzy.

After all the tee totaling of splits—like any good Type-A triathlete — he had the epiphany most any triathlete realizes: the sport is a balanced exerted effort. “Granted, this was my first one, but I think the coolest thing is all three add up to fatigue, but all three use difference muscles. It was a ball.” McConaughey took fifth in the celebrity category, in 1:43:48.

Lopez finished the race in 2:23:38, taking fifth in the women’s celebrity category.

All the pros agreed that the celebrity angle, and the crazy media that comes with this event, only benefits multisport. “I reckon it’s good for the sport,” McCormack said. “ I saw J-Lo and McConaughey and saw these other faces, saw Tiffany Amber Thiessen. The more of this Hollywood set that comes into our sport, the more it boosts the profile of the sport.”

“It’s intimidating standing in transition with those guys that you see in the movies,” Luke McKenzie said.

The event, which doubles as a fundraiser, raised over $125,000 for Childrens Hospital of Los Angeles.
Posted by Recovox at 9:43 AM