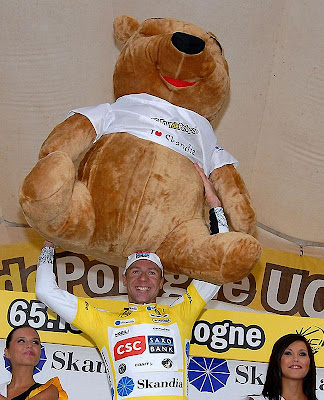 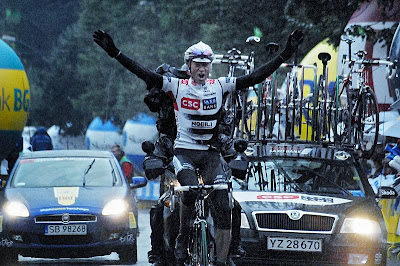 Team CSC's Jens Voigt put in one of his signature solo attacks on the Tour of Poland's sixth stage, and in weather more fitting for a Spring Classic than a summer tour, he rode his way into the race's overall lead. He now leads teammate Lars Bak by 1'22, with the morning's leader, José Joaquín Rojas fading from contention more than five minutes in arrears.

The stage, originally planned to cover 201.7 kilometres with five mountain passes had to be shortened to just 118 due to the extreme weather which has plagued the Tour since the start. "The original plan was for us to work for Lars Bak today because we thought he could avoid losing time and possibly take the lead," said CSC director Kim Andersen. "But Jens approached me and said he was feeling strong. So I said it was okay, and we agreed that he was going to make an attempt on the next climb. And from then on it was simply The Jens Voigt Show," he joked.

The shortened stage fell into Voigt's favour, but, he revealed, the entire peloton knew it. "Half of the peloton came over to me right before the stage and said, 'Jens, this is your kind of stage, it's wet and cold and it's short,'" Voigt said. "It's a great feeling because this is my last race this season and it a good morale boost for my winter training."
Posted by Recovox at 11:05 AM