So Now The Real Fun Starts 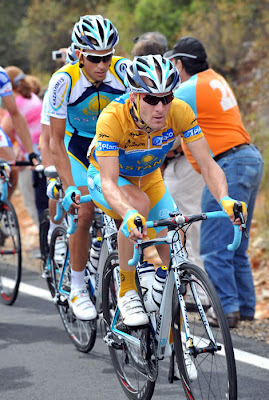 After a team time trial, an individual tesT and four sprinters’ stages, the Vuelta hits the high mountains Saturday to
complete a busy and highly entertaining week. Yet, despite the variety of the stages, nothing has really been proved or settled: all we know is that Team Astana’s boys are in really great shape to dictate the way the rest of this Vuelta shall be raced. Levi Leipheimer’s victory in Wednesday’s time trial will have set the tone for his teammates to mimic, for it was surely one of his greatest performances in a long career famous for such time trialing prowess. Judging by the enthusiasm with which Levi sprayed the podium girls with Cava’champagne, that victory meant an awful lot more than the American will ever admit to. Yet his honesty and professionalism in stating that Alberto Contador is the sole leader of Team Astana in this race was at least as impressive as his actions on the bike. Astana gracefully allowed Sylvain Chavanel to take the race-lead yesterday, while giving themselves a day or two to plan their next move.

The problem with having two timed stages in one week is that it obliges the overall favourites to ride near their maximum to keep their rivals in check, which in turn forces them towards the top of the G.C. earlier than they’d prefer. The same logic is extended to this weekend’s double thrust into the mountains, for in reality neither Team Astana, Caisse d’Epargne or CSC wants to assume the responsibility of having the race-leader so soon. Yet I cannot see how it can be avoided, for the competitive nature of the Vuelta ensures that its top riders perform at their best on the biggest stages. This is no longer a sport where you let a rival team take the race-lead in the belief that their man will weaken in the last week. The primitive plan these days is to climb as fast as your rivals and let the mathematics do the rest. In other words, the time differences from Wednesday’s TT should see Leipheimer leading the Vuelta again on Sunday evening, just in front of Valverde or Contador, with Sastre not too far away.

Team Astana is probably the one team capable of defending the race-lead for two whole weeks, and it would be great to see Leipheimer enjoying leadership status until El Angliru, one week further into the race, where Contador can work his magic at the expense of all others in this marathon. It may not work out this way. Perhaps, just maybe, an escape will gain enough time tomorrow to propel some unsung hero into the race lead for a week and relieve the favourites of excessive worry. But I do not think so. Tomorrow’s stage is not just the longest of the Vuelta at 223-kilometres, it is also one of the hardest, ending with two nasty, identical climbs in Andorra. To compound the difficulty is to realize that the first day in the high mountains is often the most decisive, with legs and bodies not yet adjusting to the demands being made and in this sense I can see trouble coming for Valverde who still cannot decide whether he is a dynamo-sprinter for short, uphill finishes, or a grand tour contender who needs to control his energy levels a little better. Valverde’s time trial around Ciudad Real was brilliant, but can he now climb with sufficient fluidity and power?

While Team Astana is playing its cards this weekend, and deciding whether to put Leipheimer back into the gold leader’s jersey, or launch a missile called Contador up the final ascents, keep an eye on Carlos Sastre. The modest little fellow is not here for fun, nor to appease his team sponsor: he did that in the Tour de France. He would dearly love to win the Vuelta for his fans, or at least secure a podium finish for them to savour. Sastre always starts a three-week race with caution, and he has been doubly quiet here because of ongoing negotiations with his new Cervelo team for 2009. Additionally, he’s had so little training time between post-Tour obligations, it is a wonder he is even in the race at all. Please note therefore, that although Sastre lost about 50-seconds to Contador on Wednesday, he is very much a contender in this race. I don’t think Sastre has the engine to out-climb Contador when the racing is full-on, but the attacks he will make as the Vuelta progresses will be enough to shake most of the others off. Sastre has nothing to lose by attacking, and everything to gain. He may be the one man who can separate Contador and Leipheimer on that final podium in Madrid.
Posted by Recovox at 2:49 PM