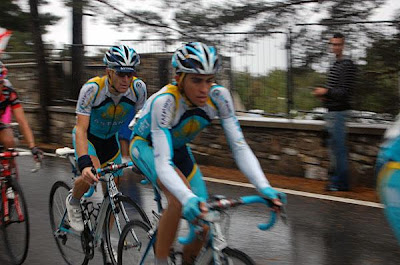 Better known for his status in the Spring Classics, Alessandro Ballan claimed victory and the overall race lead the first high-mountain stage of the Vuelta a España – 223.2 kilometres from Barbastro to Andorra. The 28 year-old Italian formed part of the day's escape group 18 kilometres into the day that was marked with four categorised climbs, including the mountain top arrival on La Rabassa.

"I started the day thinking to go tranquilo and to prepare for the Worlds. But then, I was in the break. With 30 kilometres to go I still didn't know if I could win. I am satisfied with the victory," said Ballan.

Ballan – 2'30" down at the start of the day – ensured the day's winnings with a solo bid at kilometre 209. He left behind Marc De Maar (Rabobank), part of an early escape that also included Gianni Meersman (Française des Jeux), Iñigo Landaluze (Euskaltel-Euskadi) and Xabier Zandio (Caisse d'Epargne).

The overall favourites were hot on Ballan's heels. Giro d'Italia winner Alberto Contador of Team Astana was the first to play his cards in the final two kilometres. Ezequiel Mosquera of Team Xacobeo Galicia closed down his fellow Spaniard for second on the stage, but Contador gained a precious five seconds on competitors like Spain's Carlos Sastre of Team CSC-Saxo Bank.
Posted by Recovox at 11:49 AM