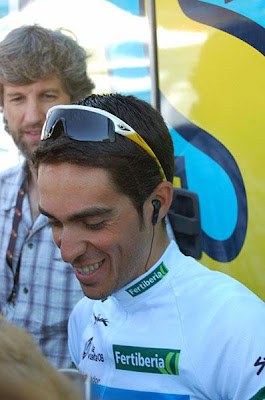 If the 2007 Tour champion is quietly cursing Armstrong’s imminent comeback, however, he certainly isn’t giving anything away publicly.

The Spanish climber said Wednesday that Armstrong would be welcomed with open arms if the Texan rejoins his former sport director Johan Bruyneel at Astana.

“If he returns and decides to come Astana, I would be the first to welcome him,” Contador said. “I’ve always admired him and I’d love to race with him. If he comes back, surely it will be at a high level.”

Since his breakout win in the 2007 Tour and his confirming victory in the 2008 Giro d’Italia, Contador has been hailed as cycling’s newest star.

But Armstrong’s return could overshadow Contador’s rising prominence both on and off the bike.

Just the announcement of Armstrong’s return has already eclipsed the Vuelta a España and pushed the race off the front pages.

“Right now I am here to try to win the Vuelta and that’s what I am going to focus on,” said Contador, who is third overall at the Vuelta. “We’ll have more time to reflect on everything once we have time to study all the facts in detail.”

Armstrong confirmed his return to cycling, but Bruyneel revealed that Armstrong’s move to Astana is not yet formalized.

Armstrong - who said he’ll be racing without a salary - could join any team he’d like, but it’s hard to imagine the Texan not racing on a team run by Bruyneel.

There are even whispers that the Texan could create some sort of special team built entirely around his comeback effort that doesn’t involve any existing professional team, a scenario Bruyneel called unlikely.

“Nothing is decided yet, but to make a (new) team is something different. All the good riders are already taken by other teams and it takes a lot to build a team to fight in the Tour,” Bruyneel said. “I cannot imagine him riding for another other two, like a CSC or Rabobank, just to say two.”

Before the stunning news of Armstrong’s return, Contador was quietly consolidating his role as the team leader at Astana.

Contador – whose contract with Astana runs through 2010 -- is making the most of the 2008 season despite Astana’s controversial exclusion from this year’s Tour, with victories in the Vuelta al Castilla y León, Vuelta al País Vasco and the Giro.

At the Vuelta, the team is completely backing Contador with a stellar lineup that also includes Andreas Klöden and Levi Leipheimer, evidence of his rising importance within the team.

If Armstrong does rejoin his longtime director Bruyneel at Astana, his larger-than-life presence will certainly reshuffle the existing power structure within the team.

Along with Contador, there are Leipheimer and Klöden, two riders who’ve also finished on the Tour podium and who still harbor their own personal ambitions.

Contador seemed peeved Wednesday when journalists kept asking him if Armstrong’s arrival to Astana would undermine his role as team leader.

“We could be good teammates, but if I go to the Tour next year, it’s to win,” Contador said. “What problem would we have?”

Bruyneel said if Armstrong did come back to Astana, he would have to prove his worth within the team.

A Tour showdown between Contador and Armstrong would be one hell of a race. Whether or not they’ll be on the same team remains to be seen.
Posted by Recovox at 10:47 AM