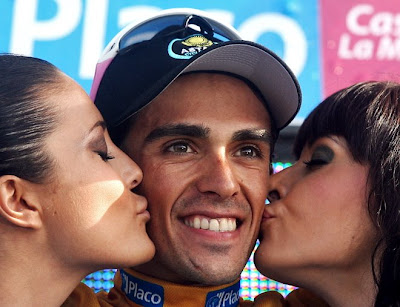 Just one day separates Spaniard Alberto Contador from his third Grand Tour victory in 14 months, but on Saturday's uphill time trial to Navacerrada, the 25-year-old showed uncharacteristic frailty. Trailing teammate and stage winner Levi Leipheimer by 31 seconds at the top of the 17.1km climb, his face twisted in pain, Contador earned his likely Vuelta a España win the hard way.

He now leads the race by 46 seconds over Leipheimer, and is poised to become only the fifth rider in history to win all three Grand Tours. The race concludes Sunday in Madrid.

Despite his young age, Contador showed his experience when put to the test. Because his legs weren't the best, he decided to change his strategy. "I went a bit more steadily," he said, and thereby missed out on the chance to score his third stage victory in this year's race, but ensured he wouldn't be toppled by Leipheimer.

Contador learned his lesson from two experiences. One was the last-minute invite to the Giro d'Italia, which he received while sitting at the beach. Despite the difficult task without proper preparation, he suffered through to take overall win. He also may have remembered his Olympic time trial, where stormed off the start ramp like a man possessed, but later suffered and faded to just outside the medal spots.

The Spaniard admitted there was a lot of pressure on him. "I was considered the favourite number one." But he drew strength from his form. "When I was training in July and August I sensed that I could win the Vuelta."

Of his three Grand Tour victories he has great memories of all of them and it was difficult to pick the importance of one win over another. "It's true that the Tour de France victory impacted me and probably brought me the most joy. After all, it changed my life." But number two and three are not far behind. "In the Giro, I will never forget the tifosi."

Then there is racing at home in the Vuelta a España, which is also something special. "There were so many fans here this year, it was really special." It gave Contador additional pressure to perform well under the watchful eye of his people, but it also had some advantages. "Racing at home is very nice. You feel a little bit more balanced. You are used to everything. It feels like home."

Contador compared the three races to each other. "The Vuelta has steeper climbs compared to the Tour. There was a lot of spectacle this year." As for the Giro it wasn't so much the parcours that stood out for him. "It was really, really cold this year in Italy."

Contador hadn't given much thought of entering the history books. "I am still young, I want to win races, but I am not thinking about creating a legacy."

Equally, he didn't know yet what was next on his wish list. He felt that he had already achieved a lot. "For a rider of my characteristics, I have won the three Grand Tours. For now I will just enjoy that victory." After he won the Tour de France last year, he was facing similar questions. He had just achieved his three goals. He wanted to become a professional. Then he wanted to race the Tour and finally he wanted to win it. After that was achieved, people asked him what was next. "Then came the Giro d'Italia win and now the Vuelta."

Contador doesn't think too much about the future and will just enjoy his latest win. Of course, some celebrations are on order as well. "My teammate will await me at the hotel and we will have a special dinner, not just the usual pasta and fish..."
Posted by Recovox at 5:44 PM