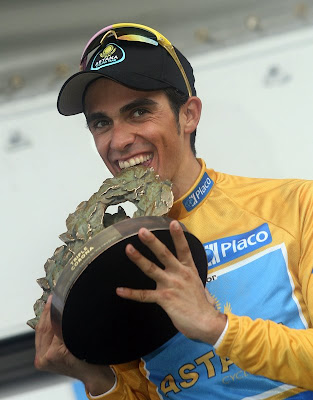 Alberto Contador of Spain secured overall victory in the Tour of Spain in Madrid on Sunday to join a select club of riders to have won all three of the sport's major Tours.

The 2007 Tour de France winner also won this year's Giro d'Italia, meaning he has become only the fifth rider in history, and the first ever Spaniard, to win all three of cycling's three-week Tours.

French duo Jacques Anquetil and Bernard Hinault, Belgian legend Eddy Merckx and Italian Felice Gimondi all distinguished themselves from riders who only concentrate on the Tour de France by also winning the Vuelta and the Giro.

But Contador's achievement is all the more impressive given he has done so in the space of 14 months.

Danish rider Matti Breschel, of the CSC team, took the final stage victory into Madrid but, with respect, it was Contador who attracted all the plaudits after yet another stunning display of three-week stage racing.

The Spaniard claimed his maiden three-week stage race victory when he won the Tour de France in 2007 with the Discovery team. But later that year he was controversially uninvited to the 2008 race after organisers 'sanctioned' his new team, Astana, despite a management overhaul for a number of doping offences during that year's race.

Contador turned his attention to the 2008 Giro d'Italia, which he won ahead of Italian Riccardo Ricco, who in July was thrown off the Tour de France for testing positive for banned blood booster EPO (erythropoietin).

Contador then went to the Tour of Spain as the overall favourite and put his rivals to the sword in the mountains, while performing strongly in the race's time trials.

American teammate Levi Leipheimer won the penultimate stage, a 17.1km uphill time trial, on Saturday to close an overnight gap of 1min 17sec on his Spanish teammate to just 46sec.
Posted by Recovox at 10:35 AM