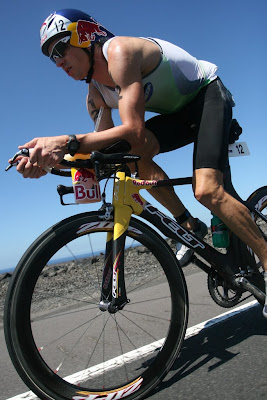 After a disappointing withdrawal from the Leadville 100 following a dislocated big toe only 3 days before the big event, and staying true to his decision of taking a year away from the lava fields in Kona, Tim DeBoom has refocused his attention on the remainder of the 70.3 Ironman Series for 2008.

First up for Tim will be a stop at the Longhorn 70.3 Tri in Austin, TX where he will take on the likes of Bjorn Andersson, Kieran Doe and Simon Lessing among others. The half ironman distance is arguably Tim's best distance from a talent standpoint. His natural speed that helped him win ITU world championships as an age grouper as well as represent the US at 2 Pan Am Games and the Goodwill Games will aid him well as he uses the half distance to help in his efforts to hit the 2009 season at full speed.

Tim's got his fingers in alot more than racing this year as he is working not only with his wife Nicole and her apparel line Skirt Sports, but also with his new partners at the Red Rock Racing Triathlon Series, his part ownership in the DeBoom Sports Mecca, and his new apparel line launch of the Endurance Conspiracy with brother Tony.

To quote a DeBoom movie favorite, Aspen Extreme, "skiing's the easy part." If you replace "skiing" with "tri training", then you have an understanding of Tim's 2008. Tim's looking forward to getting back to what he does best in 2009 - racing..and winning.
Posted by Recovox at 8:45 AM