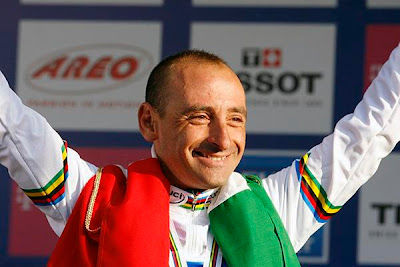 The 2008 World Championships presents Paolo Bettini the chance to make history – a never before seen three consecutive world titles. Better yet, the Italian winner in Salzburg (2006) and Stuttgart (2007) has the chance to take the rainbow jersey on home soil. Lombardia's Varese hosts the battle, the 75th edition of the World Championships beginning on September 23 with the U23 time trial and culminating with the men's road race on September 28.

The 34 year-old defending champion from La California, Livorno, is already part of an elite group of repeat winners, which includes Greg LeMond, Gianni Bugno, Freddy Maertens, Georges Ronsse, Briek Schotte and Rik Van Looy. But he will be savouring the chance to trump Alfredo Binda, Eddy Merckx, Rik Van Steenbergen and Oscar Freire, the only other triple winners, by taking his titles three years in a row.

Freire, on the other hand, will be looking to become the only rider in history to win four world championships, and he's got a strong and unified Spanish team behind him – one that includes (soon to be) triple Grand Tour champion Alberto Contador, Olympic champion Samuel Sanchez, and three-time world championship podium finisher Alejandro Valverde.

The course, however, will more than likely favour Bettini due to its similarity to the last two editions.

Based in northern Italia, Varese will host the start and finish of all six world title events from its Mapei Cycling Stadium, which is a specially converted horse track. The time trails for under-23, women and men categories will use varying routes out of the stadium and the road races for the same three categories will all use a 17.35-kilometre parcours.

German Jens Voigt triumphed the last time the circuit was used, in the Giro d'Italia's stage 18, when the finish was placed closer to the top of Ronchi on Via Sacco. This time the riders will face an extra three kilometres – predominantly flat – before arriving to the line.
Posted by Recovox at 11:17 AM