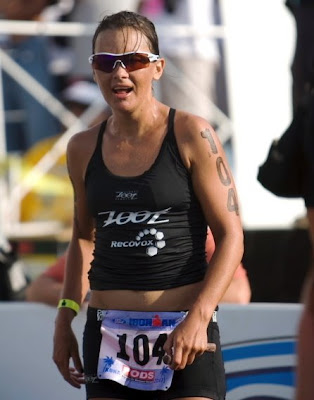 Well, where do I start? The last three weeks have been a whirlwind of travelling, racing, dnfing :(, and shopping I’m writing this blog from Santa Monica, and in 5 hours I will be leaving for the airport and flying to Jeju!!! I’m so excited!
Anyway, you’re probably all thinking what in the hell is my blog title all about? Well, after yet another disaster for me at Penticton, I was very close to jumping off the edge, and giving the sport away. Luckily for me, my mum had decided to take a holiday, and was with me in Penticton, and was able to provide much needed support and words of wisdom. She reminded me of how much I love the sport, and if I was to give up, I would never be able to achieve what we both know I can.

We also talked alot about my triathlon experiences, and I recollected my first long course triathlon. It was in 2005, and I had been in Europe for 3 weeks, and Doc decided that I should do the Gerardmer Long Course Triathlon (3/120/30). I had never covered anything longer than a half, let alone 30 km of running or 120km of cycling. We drove there, and anyone that has ever spent a little bit of time with the Doc, knows that he pretty much can talk non stop, and finds the right way to motivate someone. Anyway, he reasoned that racing long course triathlon is one of the easiest jobs in the world, and likened it to shovelling shit. He told me if someone told him he could earn a couple of thousand dollars, for shovelling shit for 8 eight hours, he’d respond with, ‘pass the shovel’ (or it could of been, ’stuff the shovel, I’ll use my hands!!!’, I can’t remember, hahahaha). We had already booked flights for Ironman Louisville, so really, I had no choice, but to suck it up, get my arse back on the startline, and shovel shit for 10 hours.

So after two full days of travelling (the drive back to Calgary from Penticton, then the flight to Kentucky), we had reached Louisville. Friday and Saturday were spent doing the usual pre race stuff, but mostly I kept a low profile. I was slightly concerned about the lack of training in my legs during the week, but told myself, ‘oh well, you’ll have plenty of opportunity on sunday for training’.

I won’t really go into much detail about the race. While it wasn’t my best physical performance, it was probably my biggest mental performance in a race, aside from IM Austria 2006, where I had Lori Bowden (probably the best female IM runner in history), chasing me and putting time into me. I swam decent, I rode decent, and ran terribly!!! At the end of the day, I asked myself, could I have went any harder at any point of the day? Maybe, maybe not….I really don’t know. However, I do know that I was so proud to be an Ironman finisher again, and now I can’t wait for Hawaii!!!

So, what have I been up to since last Sunday? I’ve managed to get some training in, and thanks to my homestay here in Santa Monica, Steve, I’ve had a free pass all week at a fancy LA gym. Since my bike was in for a service midweek, I thought why not go to a spin class. All I’m going to say is, a spin class two days post ironman is not a good idea. The instructor had us out of the saddle doing this running like motion with our bums hovering just above the seat for about 80% of the class. Apparently it’s good for toning your butt, but from my experience, it killed my quads.

I’ve also spent a decent amount of time at Wholefoods the past 4 days. I love that place, and would eat every meal there if I had the choice. Now, I have to go and pack, because I’m leaving in 4 and 1/2 hrs.
Posted by Recovox at 10:28 AM